Alleged ‘sextortionists’ on Web meted out P144,000 bail each 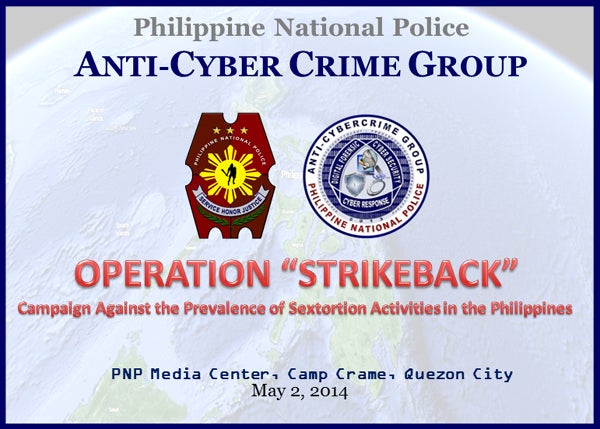 NAGA CITY, Philippines—A government prosecutor here set bail at P144,000 for each of the 33 employees of an online service who were arrested last Thursday for alleged “sextortion” activities.

Nacor said the respondents were employees, agents or “chatters” of Money Maker Portal Web Solutions (formerly Digital Minds) who were allegedly involved in the advertising and marketing of obscene pornographic and dating sites on the Internet.

She said the respondents were found engaging in sexual conversations via Yahoo Messenger and Facebook chatbox and charging payment online through credit cards.

“For the purpose of completing the transaction, the client has to input his credit card information and, once signed up, the agent persists to extend the conversation to stay online,” Nacor said.

Aside from the 33 employees, a John Doe was also meted out P144,000 bail, said the information submitted on May 2 by the city prosecutor to the Executive Judge of the Regional Trial Court in Naga City.

Charvel Yap Rebagay, owner of the online service company, was not included in the information sheet. But records showed that in the complaint submitted after the raid by the Anti-Cybercrime Group (ACG), there were 34 persons on the list including Rebagay and the 33 employees.

Nacor said a separate complaint could still be filed against Rebagay if he was not the John Doe referred to in the information.

Rebagay was not among those rounded up during the simultaneous raids on the suspected cybercrime dens in Naga City, in the towns of Nabua and Libmanan in Camarines Sur and in Legazpi City in Albay.

The whereabouts of Rebagay remained unknown but his lawyer, Lheila Mendoza, said he was “just around” even as she declined to reveal his location.

In the information they submitted to the court, the ACG named as respondents 28 men and five women, all in their 20s.