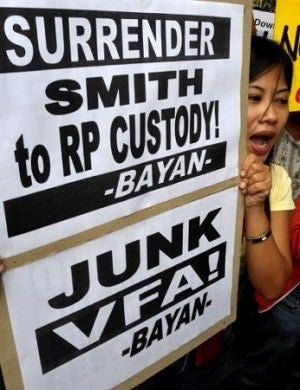 Activists protest outside the US Embassy in Manila on February 12, 2009, demanding that it order the imprisonment of US Marine Lance Corporal Daniel Smith, convicted in 2006 to life in prison for the rape of a Filipina woman. AFP FILE PHOTO

MANILA, Philippines—Talks are going on between the Philippines and the United States to clarify provisions in the Visiting Forces Agreement (VFA) on criminal jurisdictions over erring American troops.

The talks are aimed at avoiding another controversy after the US Embassy in Manila took custody of Marine Lance Cpl. Daniel Smith while he was being tried for the rape of a Filipino woman in 2005.

Malaya mentioned the talks after reporters asked whether the Enhanced Defense Cooperation Agreement (Edca) covered American soldiers who commit crimes while in the Philippines for joint US-Philippine military exercises.

Malaya, a member of the Philippine negotiating panel for the Edca, said the VFA provisions would still be followed even if the US troops are in the country for Edca-related activities.

The government has said the Edca is under the purview of the VFA and the Mutual Defense Treaty between the Philippines and the United States.

“We are hopeful that in the very near future, we can already come up with agreed terms with the US on specific places of confinement. So when there will be a next case, if ever or whenever … there would already be specific mutually agreed places of confinement for them, where they would be held in custody,” Malaya said.

Smith was a participant in Balikatan (shoulder-to-shoulder) exercises in 2005 when a Filipino woman identified only as “Nicole” accused him and his fellow soldiers of raping her in Subic, Zambales province.

The US Embassy took custody of the American servicemen even after Smith was found guilty a year later and sentenced to prison. The others were swiftly flown out of the Philippines after the verdict was handed down.

The Supreme Court ruled against an agreement between then Foreign Affairs Secretary Alberto Romulo and then US Ambassador to the Philippines Kristie Kenney that allowed the US Embassy to take custody of Smith, saying it went against the provisions of the VFA.

Nicole later recanted her testimony against Smith and left for the United States for good.