Two Bobbys of Filipino descent among TIME’s ‘most influential’

What’s the point of being named one of the most influential in the world when your children don’t get a copy of TIME magazine?

With giddy humor, songwriting couple Bobby Lopez and wife Kristen Anderson shot back when I asked how they’re feeling being included in TIME Magazine’s 100 Most Influential People in the World in 2014.

“We’re here in the ‘100 influential’ but our kids don’t have that magazine,” Kristen told The FilAm at the Lincoln Center red carpet on April 29.

Turning somewhat serious, she revealed that Oprah sent them flowers and that it’s “hard to say I’m one of the 100 most influential persons!”

Bobby said the award will be framed and hung on a special place in their home.

The annual TIME gala gathered drenched luminaries from all over the world — from politicians to actors, musicians to business leaders – as they sought refuge from the driving rain at the Lincoln Center. The full list. 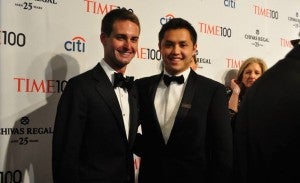 Bobby Lopez, who is a rarity for winning all major music awards, the Emmy, Grammy, Oscar and Tony, and his wife Kristen, won for the phenomenal success of “Let It Go,” a song created for the Disney movie “Frozen.”

“It’s that perfect mix where a songwriter can get a song you’ve never heard before stuck in your head in 30 seconds,” write South Park creators Trey Parker and Matt Stone of their friends Bobby and Kristen in the TIME 100 Titans.

“They are both completely steeped in the traditions of Broadway musicals, but they’re really smart and would never be happy just regurgitating what’s come before. And while we know they write for themselves and their peers, they also have two little girls who they definitely had in mind.”

One honoree who adored the couple’s composition was theatre and opera director Diane Paulus.

“I love them,” she told The FilAm. “I have two daughters who sing ‘Let It Go’ every day when we walk down the streets. Their work is phenomenal. I love that they’re a couple.”

The Manhattan-born Bobby Lopez is of Filipino descent. A New York Times article says he wrote his first song at age seven.

Another honoree of Filipino ethnicity is Bobby Murphy. He and fellow Stanford University student Evan Spiegel developed Snapchat, the photo-sharing app, with headquarters in Venice Beach, California. Snapchat allows the sharing of photos and videos for a limited amount of time after which the images are gone forever.

“Evan Spiegel and Bobby Murphy created something radical in its straightforwardness and speed: take a snap of the moment and choose who receives it and how long they get to see it before it disappears forever,” writes Twitter co-founder and Chairman Jack Dorsey in TIME 100 Titans. “Snapchat is a perfect expression both of Evan’s and

TV journalist Barbara Walters applauded this year’s list and said everyone was deserving of the honors.

“I think it’s a wonderful list,” she said. “I think TIME Magazine takes a great deal of time not just to put rich and famous but to put people who have done good.”