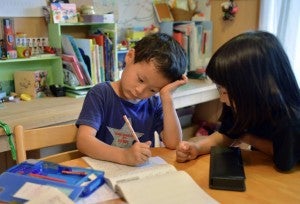 TOKYO—Almost nine out of 10 children taken from their families in Japan end up in institutions rather than foster care, a rights group said Thursday, a rate it said was the highest among developed nations.

Just 12 percent of children who have been removed from their natural parents are placed with foster families, leaving tens of thousands of other youngsters to languish in understaffed children’s homes, Human Rights Watch said.

That figure is the lowest in the Organization for Economic Cooperation and Development (OECD), a club of rich nations, and is just a fraction of that in Australia, where 93.5 percent of these children live in a family home.

“It’s heartbreaking to see children crammed into institutions and deprived of the chance for life in a caring family setting,” said Kanae Doi, Japan director at Human Rights Watch.

“While other developed countries place most vulnerable children in family-based care, in Japan, a shocking 90 percent end up in institutions.”

In neighbouring South Korea, 43.6 percent of children end up in foster care. In the United States, it is 77.0 percent, while in Britain it is 71.7 percent.

The 119-page report says 39,000 children in Japan have been removed from their families by the authorities, who determined their parents were either unable or unwilling to look after them.

The report, compiled over a three-year period, found Japan’s child guidance centers — the local administrative bodies charged with dealing with children in care — are “predisposed to institutionalizing children rather than placing them in adoption or foster care”.

“These centers often defer to the preference of biological parents to place the child in an institution rather than with a foster family, or seek to avoid time-consuming and often sensitive individual adoption or foster care arrangements.”

Existing childcare institutions — while non-profit organizations — also have a vested interest in maintaining the status quo as their funding is determined by the number of children who live with them.

“Japan’s childcare policymakers are allowing bureaucratic priorities to get in the way of finding alternative care that is in the child’s best interest,” Doi said.

Cramped conditions and a shortage of staff are among problems in institutions in Japan, HRW said in its first major report since the launch of its Tokyo office in 2009.

In Britain, for example, the standard is to have at least one caregiver per child. In Japan, the child to careworker ratio is 1.6:1 for children aged one or younger, but rises to as high as 5.5:1 for those in their late teens.

“While many people working in the system are committed to helping children…care workers rotate in and out and can rarely provide consistent care to the children they oversee,” the report said.

“As a result, many children grow up in environments where they are never able to develop a bond or trusting relationship with an adult,” it said.

People who have spent their childhood in institutions frequently can only secure low-paying, low-skilled jobs if they are able to find work at all. Others turn to crime or prostitution.

Harassment and violence by adults and among children is another serious problem.

Toshiyuki Abe, 19, told HWR that when he was in elementary school he was brutally bullied by older children at his children’s home.

“I was beaten by a baseball bat, hit in the face… The older guys would just hit me if they were having a bad day,” he said, adding the institution staff knew about the bullying but did nothing.

Sayo Saruta, a lawyer and HRW consultant, said in addition to an official tendency towards institutionalizing children, there is also a paucity of quality fostering available.

She said there is insufficient support for would-be foster families, many of whom understand fostering to mean that they will be looking after a small baby whose emotional responses will be like those of any other child.

In reality, their behavior is often highly challenging.

“About 90 percent of children who need alternative care have suffered abuse from their primary carers, so they behave badly as a way of testing foster parents, many of whom are not prepared for it,” she said.