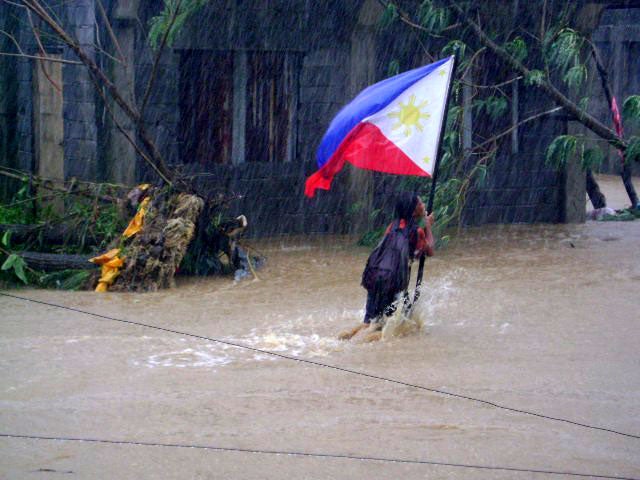 Janela Arcos Lelis, 12, wades through floodwater as she tightly holds the Philippine flag in a heroic act to save the national symbol from being swept away by the raging water on that stormy day on July 26. Albay resident Frank Lurzano captured the scene on film.

MANILA, Philippines–No one would have thought that the shy 12-year-old girl in red sneakers had achieved a feat one would normally associate with soldiers on a battlefield: Save the country’s flag.

For her deed, a little Philippine flag was pinned on Thursday on the left collar of Janela Arcos Lelis to remind all that this was the sixth grader who saved the flag from raging floodwaters when Typhoon “Juaning” slammed her hometown in July.

Lelis, from Malinao, Albay province, was given formal recognition by the National Historical Commission of the Philippines (NHCP) for what she did—the first such honor bestowed on a Filipino child, according to the government arm that promotes Philippine history and cultural heritage.

In a simple ceremony, Lelis was awarded a plaque, a Philippine flag lapel pin and P20,000 in cash for what the NHCP called her “selfless act” of courage reflecting her love for the country. She also received a full-sized Philippine flag.

“We thank and admire Janela and we hope that your classmates and all the other young people in the country will follow your wonderful example of giving tribute to our national flag,” NHCP president Maria Serena Diokno said in Filipino before fastening the flag lapel pin on Lelis’ collar.

Filipinos first became aware of what Lelis did when a picture of her holding the Philippine flag above the floodwaters swept social networking sites. A major Manila television network later featured her story.

An NHCP board resolution also gave honor to Lelis.

“This plaque of recognition is given to (Lelis) for her exemplary action, risking life and limb to save the Philippine national flag from the rising floodwaters… at the height of Typhoon Juaning in Malinao, Albay,” said NHCP Executive Director Ludovico Badoy.

Lelis’ deed was a “selfless act of courage, reflective of her love for country and a constant reverence to the national symbol,” Badoy added.

In her crisp, white and blue uniform and high-cut red sneakers, the shy 12-year-old politely obliged endless requests for photos of her with officials, employees and visitors during and on the sidelines of Thursday’s ceremony.

In a speech, Lelis recalled how her elder brother Edcel, on that stormy day of July 26, asked her to quickly return from another house to their own home to retrieve the Philippine flag, which had been entrusted to him by his school. By then, their house was already submerged in the flood.

Speaking in Filipino, Lelis said: “We have a saying that the youth are the hope of our country. When the flood swept our place in Malinao, Albay, on July 26, this saying became true for me.”

“I did not know that young as I am, I would be able to do something good for our country. My brother, Kuya Edcel, told me to retrieve our flag from the rushing waters and that was what I did.”

Lelis’ 19-year-old brother, a color officer of the Citizen’s Army Training at Malinao National High School,  could not salvage the flag himself because he was busy helping their relatives evacuate from their homes.

The waters had gone up to the level of her chest when she began to cross the water.

“I just held on tightly to a rope that our barangay captain had set up for the evacuation so I wasn’t swept away by the floodwaters,” Lelis said, shyly recounting in the dialect her experience to the Inquirer.

She did not feel fear or apprehension, she said.

While she remembered what her teachers had taught her about respecting the flag and not allowing it to get dirty, Lelis said she was also concerned about her brother if the flag was lost.

“He would have to pay for it if it was lost,” she said.

The flag was already dripping wet and partly covered in muck when she retrieved it from their home.

“I immediately removed the mud and returned to the shelter,” Lelis said.

The NHCP got wind of her story when her brave act was immortalized in a photograph taken by a Malinao resident, Frank Lurzano. The photo circulated in social networking sites.

Teodoro Atienza, NHCP’s heraldry chief, said Lelis was worthy of emulation as she had done something not even adults had accomplished.

In his more than 30 years at the NHCP, he had never encountered anyone who had risked his or her life to save the national flag, Atienza said in an interview.

“She is a very good example to the youth… I hope people will learn from her in giving the right kind of respect to our flag,” Atienza said. 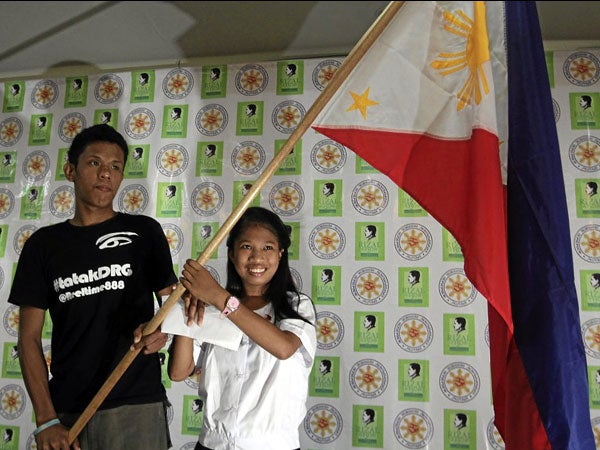 Thinking about Lelis’ bravery gave her aunt, Edna Arcos Machete, goose bumps. “It was really very stormy that day,” recalled Machete, Lelis’ guardian since she was just a year old.

Orphaned at a very young age, Lelis and her brother have been living with their maternal grandmother and aunt.

Thanking God for giving her the strength to do what she did, Lelis also acknowledged the support she received from others, including Lurzano, for capturing her bravery on camera.

“If not for him, I would not be standing before you today,” she said to applause.

Her aunt was teary-eyed during her speech. She said it was the girl’s first time to set foot in Manila. “So she’s just happy to be here,” Machete said.

Taking the long bus trip from home, Lelis arrived in Manila early Monday morning with her brother and with Machete, her uncle, and her cousin.

They are extending their stay in the capital until next week because of many invitations from other personalities, the aunt said.