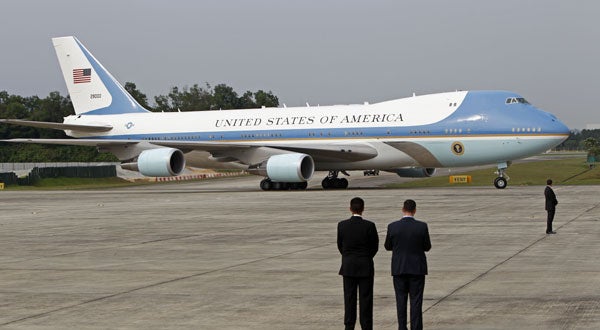 Air Force One landed at around 1:25 p.m. near the hangar of Aviation Center Inc., where US officials’ aircraft usually land when visiting the Philippines. Secretary of State John Kerry, his predecessor Hillary Clinton and former US President George Bush were welcomed in the same area.

About five minutes later, a Boeing 747 jet, which has the same color and design as Air Force One landed. Veteran airport reporters said the smaller craft served as a “decoy” Air Force One.

Obama stepped out of Air Force One at around 1:40 p.m.

The US president waved once to media people before descending from the aircraft.

He was also accorded arrival honors by an honor guard from the Philippine Air Force.

Obama boarded one of the two US Marine choppers that left the Naia ramp at around 1:48 p.m.

The Metro Manila police were caught by surprise when Obama was whisked by helicopter from Naia to Malacañang.

Villacorte described the possible convoy routes as “Options A, B and C,” when pressed for details.

As early as Monday morning, the SPD had put up a command post at the Skyway ramp exit along Andrews Avenue in Pasay City, near Naia Terminal 3 and in front of the Villamor Airbase.

Nearly 300 police personnel were deployed along the road.

Road closures were also reported in the Cultural Center of the Philippines Compound in Pasay City, leading to the Sofitel Philippine Plaza where Obama will be staying.

As Obama’s plane arrived at around 1:30 p.m., police officials could even be heard ordering a road block on Osmeña Highway, from the elevated Skyway heading to Malacañang.

But all the road preparations were for naught when the command post shortly received word that Obama would take a helicopter to Malacañang, straight from the private Balagbag ramp on Naia Terminal 3.

From Andrews Avenue, at least six helicopters, three of them apparently heliplanes, could be seen taking off from the airport at around 1:52 p.m.

Sought for comment if all the preparations were for naught, Villacorte said “this is still a contingency plan in case [President Obama’s] entourage will take the road.”

Villacorte said police efforts were not wasted for as long as Obama remained safe.

He said more policemen and checkpoints were deployed at Sofitel, to which Obama also eventually took a helicopter from Malacañang.

Villacorte noted that Obama’s overnight stay was a “show of confidence in our country.”

During the previous visit of a US President to the Philippines in 2003, George W. Bush stayed in the country for only about nine hours, Villacorte said.

Dozens of flights were delayed and a few were canceled for two major airlines on Monday as regular operations were temporarily disrupted at Naia due to Obama’s first state visit.

The Naia terminals, the country’s busiest, were closed past noon as Obama arrived. Terminal closures like this are classified as “special operations” and are typically extended to heads of state either as a courtesy or to ensure their safety, a Civil Aviation Authority of the Philippines spokesperson said.

Airport officials noted that similar delays could be expected Tuesday, as Obama is scheduled to leave the Philippines at around noontime.

Philippine Airlines said 37 flights of its flights were delayed on Monday, consisting of 29 domestic flights and 8 flights bound for

About 100 media people assigned to cover Obama’s arrival were asked to assemble at Naia Terminal 3 by 10:30 a.m., or three hours before the scheduled touchdown of Air Force One.

The newsmen were subjected to three rounds of inspections: first by the Naia security, second by the PSG and third by the US Secret Service.

Accompanied by staff from the MIAA, PSG and the Malacañang media group, the newsmen rode a bus to the welcome area near the Ages Aviation Center hangar at the Balagbag ramp of Naia.

The media people were made to line up and asked to leave their bags and gear on the tarmac. A canine unit sniffed each pile on the ground. They were then scanned one by one by a Secret Service member before they claimed their things.

The media people were asked not to make sudden movements and not to wander around the tarmac. There was a cordoned press area fronting the spot where Air Force One was set to stop but the media people were instructed to remain there due to the heat.

Reporters and camera crew did not mind the strict security procedures but suffered from the noontime heat. They were given seats under a white tent with a large fan where it was still hot since the heat did not come from only the sun but from the paved tarmac.

Reporters who had covered US leaders’ visits before wore lighter-colored clothes. One even said he applied sunblock before leaving for the coverage.

While the media patiently bore the heat, embassy press coordinators constantly expressed their concern about the media people’s welfare. They even allowed reporters and cameramen to take cover under a tree on a lot near the hangar, where it was cooler.

“We want you to be under the shade for a long as possible,” said one female embassy staff, who accompanied cameramen in setting up tripods on a platform in the press area.

“Don’t worry we’re from a tropical country,” chimed one reporter, who pointed out that one embassy staff wore a sleeveless blouse and a skirt.