Obama and his delegation were also treated to Filipino songs and dances.

“Lobster, prawns, scallops, mussels, kilawin represent the wealth of our waters. Dessert is coconut-based. Fisheries and coconut form the core of our agriculture,” Communications Secretary Herminio Coloma said, explaining the menu to reporters.

In his dinner speech, President Aquino welcomed Obama and his delegation anew to the Philippines.

“Though your stay here in my country may be short, I hope that it will allow you to see and experience for yourself how, indeed, it is more fun in the Philippines and that undoubtedly, the Philippines works,” Aquino said, eliciting a smile from Obama.

Aquino also conferred the Order of Sikatuna, with the highest rank of Raja or Grand Collar, on Obama “for his leadership and policies that assisted the Philippines in times of natural disaster, for helping uphold stability and peace by means of the rule of law in Southeast Asia, and for working with us to fundamentally raise the defense capacity of my country.”

“The first of your predecessors to receive this distinction was Dwight D. Eisenhower in 1960. Then, as now, may this conferment symbolize our nation’s esteem for the American people; and may it serve as a reminder of the mutual desire to always be partners based on the highest principles of liberty, democracy and progress,” Aquino said.

Obama charmed the Filipino guests that included former Presidents Fidel Ramos and Joseph Estrada by beginning his speech in Filipino.

“Magandang gabi,” he said, drawing applause. “I want to thank you for the magnificent welcome today, and your gracious hospitality.”

He said he was “deeply honored” by the conferment of the Order of Sikatuna on him. “I accept it in the spirit it has been bestowed: with the commitment to continue deepening the bonds between our two great nations.”

Kuh Ledesma serenaded the guests with “Let’s Stay Together.” Apl.de.Ap, Bayanihan Philippine Dance Company and Powerdance Company followed up with “I’ve Got a Feeling” and “Singkil.”

Performing together, the artists capped the program with “Happy.” 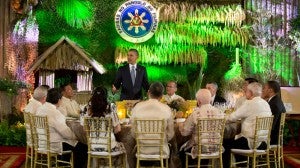 In his remarks over dinner, Obama also said that Americans and Filipinos shared many things in common, including a mutual obsession with basketball and mutual admiration for world boxing champion Manny Pacquiao.

“Even if sometimes he’s fighting against Americans and it doesn’t turn out the way we’d like,” he said, referring to Pacquiao.

And of course, the shared pride in the millions of Filipino-Americans who contribute to the United States’ economy, Obama added.

He pointed to White House executive chef Cristeta Comerford from Manila. “Thanks to her, we in the White House enjoy the occasional lumpia and adobo,” he said, drawing applause.

Obama praised Aquino for his family’s contribution to the restoration of democracy in the Philippines.

He paid tribute to Aquino’s late mother, former President Corazon C. Aquino, and the Filipinos “who took to the streets” and showed the world the “true power lies with the people.”

He was referring to the ouster of strongman Ferdinand Marcos in the Edsa People Power Revolution in February 1986.

“And Mr. President, your father offered his life, so that this nation might be free,” he said in his remarks over dinner, drawing another round of applause. He was referring to Sen. Benigno Aquino Jr., the leader of the opposition to Marcos who was assassinated in August 1983 on his return from exile in the United States.

There was no “greater nobility” than offering one’s life to the nation,” he added.

“Noynoy, you bear the scars of those who would have taken this nation backward, and you carry on your family’s noble tradition of service in your commitment to the dignity and prosperity of the Filipino people,” he said, addressing Aquino.

Spirit of the nation

Obama said the spirit of the nation could also be seen in the Filipinos’ overcoming colonialism, occupation, invasion and dictatorship.

“Yours is a fierce independence won through sacrifices and renewed with each generation,” he said. “And we saw that again this year. After (Super Typhoon) Yolanda, America grieved with you and stood with you, but we were also inspired by your resilience and your determination to care for those who have been affected.”

“Tonight, our hearts actually grieve for some of our fellow Americans back home who have been devastated by very terrible storms and tornadoes, but we draw our strength from your example,” he said.

What did Obama write in Malacañang’s guest book?