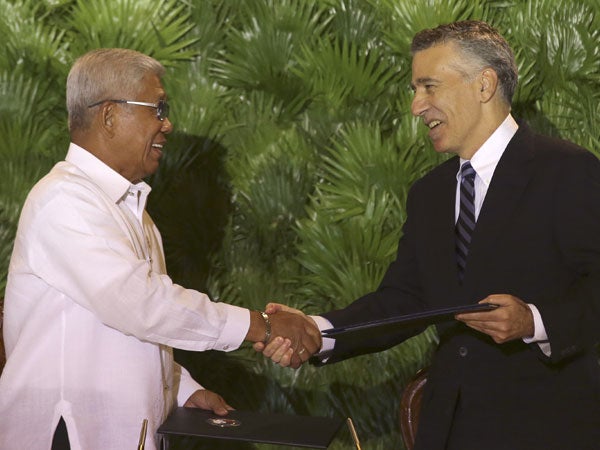 MANILA, Philippines – An amicable solution to the territorial dispute between the Philippines and China will become more difficult to achieve, or even impossible, because of the defense agreement signed by Philippines and the United States (US), China’s state-run Xinhua news agency said in a commentary Monday.

“By striking the defense deal with the US at this moment despite domestic opposition, the Aquino administration has made its intention clear: to confront China with US backing,” Xinhua writer Shang Jun said in a commentary.

“Such an aggressive posture could easily lead to further provocation. An emboldened Aquino would make an amicable solution to the territorial disputes more difficult, if not impossible, and intensify regional tensions,” he said.

Philippines and China are locked in a maritime dispute over the West Philippine Sea (South China Sea) which is presently undergoing an arbitration process before the International Tribunal on the Law of the Sea (ITLOS).

US President Barack Obama visited the Philippines as part of a four-nation tour that included Japan, Malaysia, and South Korea to solidify US partnerships as it undergoes its rebalance to Asia.

Obama pledged unwavering support for the Philippines amid the ongoing tension in the region caused by the maritime disputes.

“Given that the Philippines is at a bitter territorial row with China, the move is particularly disturbing as it may embolden Manila in dealing with Beijing,” Shang said.

“A more assertive or even reckless Manila would stoke regional tensions and in turn upset Obama’s policy of rebalancing,” he added.