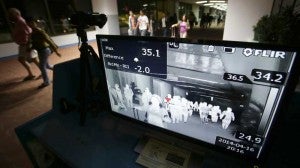 Passengers walk past a thermal scanner at the medical quarantine area at the arrival section of Manila’s International Airport in Paranaque, south of Manila, Philippines. AP FILE PHOTO

Norvie Taruc-Jalani, chief of the Regional Epidemiology Surveillance Unit (RESU) of the Health Department (DOH) in Western Mindanao, said there were “six cases” earlier endorsed to them, and among these cases was the name of a man from Barangay Lunzuran.

Although she would not name the Lunzuran resident, Jalani said the man’s name was on the manifest of Etihad Flight No. EY 0424.

However, Jalani said further investigation revealed that the passenger on the Etihad flight came from the Bicol region and not from Western Mindanao, including this city.

“It was sort of a mix-up in identity since the person here turned out to have not traveled (outside the country) for over two years,” she said.

Jalani said the verification process also found out that while the Lunzuran guy and the Region 5 man shared the same name, their middle names and passport numbers were different.

Jalani said this was the reason the Lunzuran person was cleared, along with two other persons who took the Etihad flight.

She said the three other passengers now under custody by the DOH have been staying in isolation while awaiting results of the tests on them to determine whether they had contracted MERS-CoV.

One of them is a Lebanese, who had traveled to Mindanao via the Etihad flight from Abu Dhabi, to visit his girlfriend.

She said there was no reason for the people of Western Mindanao to be alarmed about Mers-CoV as there had been no confirmed case in the region so far.

Dr. Teogenes Baluma, director of the Department of Health in the region, said none of the 11 residents of the region, who shared the same Etihad flight as the male Filipino nurse, tested positive.

“We have nothing to worry, all of the 11 persons who were medically examined were Mers-CoV-free,” Baluma said.

While he did not name the 11 passengers, Baluma said three of them were from from this city, including a foreigner; one from Pikit, North Cotabato; and one from Sultan Kudarat.

The six others came from Sarangani, South Cotabato and General Santos City.

All 11 Etihad passengers from Central Mindanao had undergone throat and nasal swab – the medical testing procedure to determine whether a person has Mers-Cov – while under a 14-day isolation period, according to Dr. Dimarin Dimatincal, professional staff chief of the Cotabato Regional Hospital and Medical Center in Cotabato City.

Dimatincal said all 11 Etihad passengers had already been allowed home for testing negative of the disease.

“There’s nothing to fear. I appeal that we stay calm,” Baluma said.

Mers-CoV has killed more than 90 of the nearly 250 confirmed cases since its discovery in Saudi Arabia in 2012.

With reports from Edwin Fernandez and Charlie Señase, Inquirer Mindanao