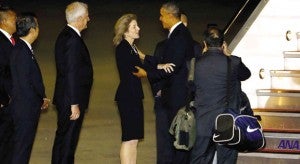 ASIA TOUR STARTS US President Barack Obama is welcomed by US Ambassador to Japan Caroline Kennedy upon his arrival at Haneda International Airport in Tokyo on Wednesday night. AP

Obama says South Korean women were violated in ways that were shocking even in the midst of war. He says those women deserve to be heard and respected and that there should be a clear account of what happened.

He says the Japanese people and their prime minister understand the past must be recognized honestly. But Obama is urging Japan and South Korea to move forward because he says their interests clearly converge.