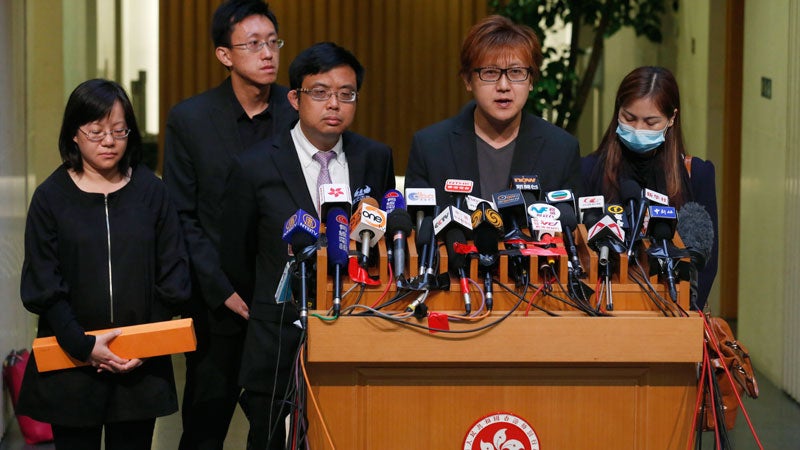 Tse Chi-kin, second from right, brother of killed hostage Masa Tse, is accompanied with hostage survivor and victims’ family members during a news conference in Hong Kong Wednesday, April 23, 2014. Hong Kong and the Philippines reached a compromise Wednesday over Hong Kong’s demands for an apology for the families of eight tourists killed in a bungled response to a 2010 Manila hostage-taking that soured relations. (AP Photo/Kin Cheung)

MANILA, Philippines — China has expressed support for the agreement between Hong Kong and the Philippine government over the 2010 Manila Hostage crisis and said it was relieved that the issue has finally reached a conclusion.

“We are relieved to see that this incident is properly resolved in the end,” he said following the joint statement released by Hong Kong and Philippines on Wednesday after Manila Mayor Joseph Estrada flew to Hong Kong to apologize to the relatives of the victims and deliver P115 million in compensation.

Several Hong Kong tourists were killed in the 2010 Manila hostage crisis when sacked policeman Rolando Mendoza hijacked their tour bus and held them hostage at the Quirino Grandstand, Luneta.

The incident ended in a shootout after a rescue operation by the police failed. Mendoza was killed along with eight hostages in the rescue that has been widely regarded as bungled operation.

Relations between the Philippines and Hong Kong soured after the incident as the demands for the relatives of the victims for a formal apology was not met.

“We have made enormous efforts and urged the Philippine side on many occasions to take seriously and respond positively to legitimate appeals of the SAR government and relatives of the hostages,” Qin said.

“The principle of our diplomacy, which the Foreign Ministry has been upholding and will continue to do so, is putting the people first and conducting diplomacy for the people. Therefore, we will do all that we can to ensure the safety and lawful rights and interests of overseas Chinese citizens, including Hong Kong compatriots,” he said.

Binondo Councilor Bernardito Ang, who was with Estrada in Hong Kong, said that the P115 million compensation was raised by businessmen from Hong Kong and Philippines.

PH-HK relations repaired, but families of victims still being courted

Tiff with HK over Luneta hostage fiasco finally over