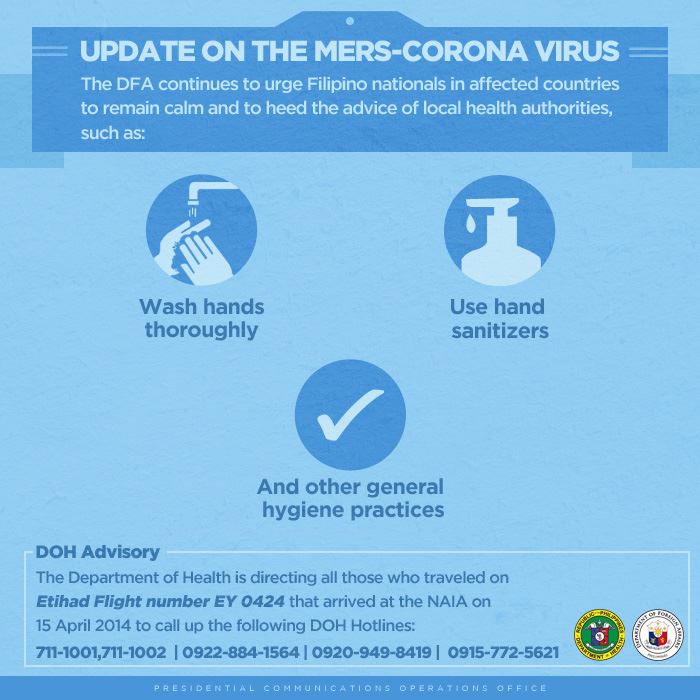 MANILA, Philippines—While there remains no travel restrictions in the Middle East, the Department of Foreign Affairs (DFA) continues to advise Filipinos in the Arabian Peninsula to take precautionary measures amid the continuing threat of the deadly Middle East Respiratory Syndrome – Corona Virus (MERS-CoV).

In a joint public advisory with the Department of Health, the DFA said Filipinos in the Middle East should take care of their health, particularly those working and residing in the United Arab Emirates (UAE) and Saudi Arabia, where deaths due to the virus have been recorded.

“Currently the World Health Organization has not declared any outbreak or epidemic of MERS-CoV in the Middle East. There are no travel restrictions to and from the Arabian Peninsula. Despite these, we are encouraging Filipinos in the Middle East to practice the precautions below for their own protection,” read the public advisory released Monday afternoon.

The public advisory was released in the midst of government’s efforts to account for passengers of the Etihad Airways Flight No. EY 0424 that arrived on Apr. 15 carrying a Filipino nurse who had been exposed to the virus at a Middle East hospital.

In the advisory, the DFA and DOH reminded Filipinos to practice proper hygiene, particularly through hand washing or the use of hand sanitizers before and after eating and before and after food preparation, among others.

The agencies also urged Philippine citizens based in the Middle East to observe proper etiquette while in public, particularly covering the mouth and nose while sneezing or coughing, then washing their hands. Those with respiratory illness should remain indoors and wear a surgical mask to avoid transmission.

Filipinos should also avoid contact with farm and domesticated animals, particularly camels, who are believed to be carriers of the virus. Contact with those known to be infected with the virus should be avoided.

Health workers exposed to patients with MERS-CoV must “comply with local health regulations and postpone any trip abroad until after test results are negative,” the advisory said.

The DFA and the DOH also advised Filipinos not to panic over rumors about the spread of the virus, including supposed warnings by UAE health authorities for the public to avoid public places “believed to be hotspots for the new killing virus.” Abu Dhabi has denied issuing any statement with such warning.

Last week, one Filipino worker died of the virus in UAE, while five others are in stable condition at a hospital.

The virus, which stems from the same viral family as the Severe Acute Respiratory Syndrome, has killed 93 of the 243 confirmed cases worldwide since March 2012, according to the World Health Organization.