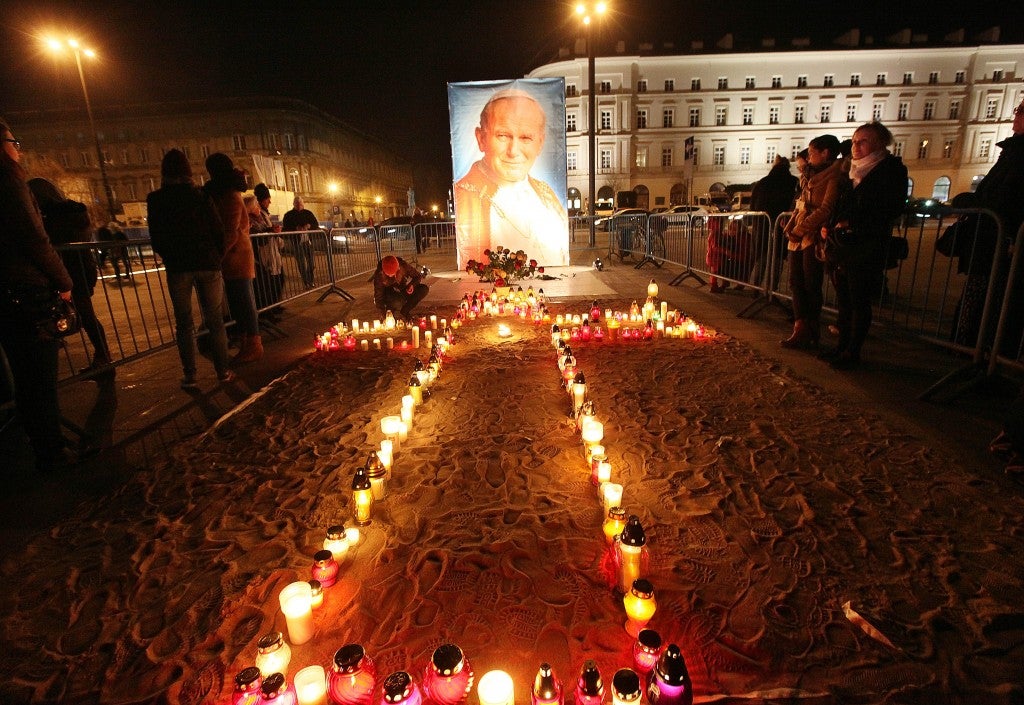 In this April 2, 20014 file photo an unusually empty main square with a commemorative cross in downtown Warsaw, Poland on Wednesday, April 2, 20014 during observances marking nine years since the death of much-loved Polish-born Pope John Paul II. Over the years, the observances attract fewer and fewer people in an a sign that the enthusiasm that the Poles accord one of their greatest countrymen is gradually dissipating. AP

MANILA, Philippines—Filipino Catholics who cannot fly to Rome for the two papal canonizations on Sunday may still get to revel in the spirit of the occasion through various activities prepared by dioceses in Manila and other parts of the country.

A Mass to be officiated by Manila Archbishop Luis Antonio Cardinal Tagle will be held on Sunday at Smart-Araneta Coliseum, which Pope John Paul II declared as a “colosseo of papal audiences” during his visit in 1981.

The faithful can also watch the canonization rites for John Paul II and Pope John Paul XXIII at the coliseum, according to Cubao Bishop Honesto Ongtioco.

In Malolos, Bulacan province, there is an ongoing exhibit at the cathedral on the life of the two popes. “We also have regular Sunday Masses with the veneration of the relics of the two saints,” said Malolos Bishop Jose Oliveros.

In Imus, Cavite province, there will be youth vigils in the parishes to celebrate the canonizations, according to Bishop Reynaldo Evangelista. “I encourage our priests to give a talk or catechesis on the two popes,” the prelate added.

In Legazpi City, a special Mass will also be celebrated at 4 p.m. on the day of the canonization. “It is our way of joining the whole church in thanksgiving for the gift of our new pope saints,” said Legazpi Bishop Joel Baylon.

In the runup to the canonization, a triduum of Masses will also be held at the Cathedral of St. Gregory the Great in Albay province, and whole film showings and talks will be held in the evenings.

“We will also display secondary relics and memorabilia of Pope John Paul II,” he said, adding that most of the relics were from the pope’s visit to Legazpi in 1981.

In September last year, Pope Francis announced the upcoming canonization of the two popes, considered among the most influential Catholic figures in the modern era, in a joint ceremony on April 27.

John Paul II visited the country in February 1981 and January 1995.

The first visit saw the first beatification rites to be held outside Rome, for Filipino martyr and now Saint Lorenzo Ruiz. In his second visit, the Pope led the World Youth Day celebration with a three-and-a-half-hour Mass in Manila that drew an estimated three million people. With Marielle Medina and Rafael Antonio, Inquirer Research

Cardinal Tagle to hold Mass at Araneta Coliseum on papal

Read Next
‘I am here in Manila,’ says Almendras to belie Joseph Estrada
EDITORS' PICK
Quarantine violations still punishable despite deleted provisions in ‘Bayanihan 2’ – Bato dela Rosa
‘Puno na lahat:’ Metro workers brave lack of public transport, rains on Day 1 of GCQ
Leveling up your ‘lutong bahay’ with the kitchen companion you never knew you needed
Someone from the Philippines can become $356 Million richer this Tuesday
BFP raises general alarm over Mandaluyong fire
Cherry Mobile teams up with Cloud Panda PH, launches online store
MOST READ
‘If I had not been SolGen, I will make you eat your words,’ Calida tells Coco Martin
Quarantine passes no longer required under GCQ, but curfew remains
5 car dealership outlets shutting down
BFP raises general alarm over Mandaluyong fire
Don't miss out on the latest news and information.