A ‘time-travel’ production of ‘Les Miserable’ at Stanford 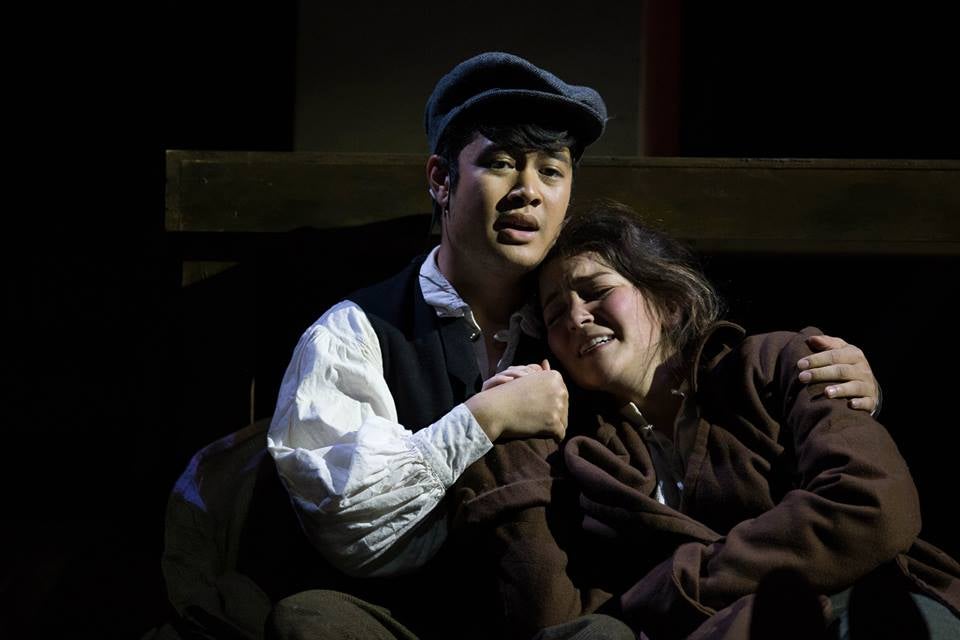 “The first thing that really sets this production apart from others is the Opera-Going Experience Project (OGEP) that we have created,” said Kelly Gregg, a junior double majoring in theater and human biology, the show’s producer.

OGEP is a pre-show performance created to transport the audience to a 19th century opera house akin to one Victor Hugo, the author of the book Les Misérables, would have attended with his contemporaries.

“We accomplish this by having 16 actors meander through the lobby dressed in 19th century clothing, portraying historical figures of the time, gossiping about their fellow patrons, commenting about the politics of the day and critiquing Hugo’s latest work,” explained Gregg.

Staged through April 19, the production with a diverse and highly gifted cast is presented by Ram’s Head Theatrical Society. Two members of the cast are of Filipino descent.

“TonyBoy Marin and David López have brought so much to this production; both as actors and as all around great people! They have been such a joy to work with and are so professional,” said Gregg.

“It’s been really fun seeing TonyBoy grow into his role. David has such an amazingly beautiful voice! His performance of ‘Empty Chairs at Empty Tables’ is so heart-wrenching,” she added.

Lopez reprises the role of Marius for his first Stanford production.  He plans to major in management science and engineering, but has been a stage performer since the sixth grade.  Throughout the preparation and rehearsals he noted how dedicated and committed the entire crew was to fulfilling their vision for “Les Miserables.”

“I wanted to play Marius because of ‘The Café Song,’ more commonly known as ‘Empty Chairs at Empty Tables’,” Lopez said. The song comes at the end of the show and portrays the unbearable grief and survivors’ guilt that Marius feels now that his friends are dead.

“The song is so emotionally charged, giving me an incredible opportunity to act and to embody the role,” he explained.  “Embodying a character to the point where you actually cause yourself to tremble or cry is a strange but unforgettable feeling.  It’s this sort of out-of-body experience that makes me love theater.”

Nine-year-old Christopher “TonyBoy” Marin plays the part of Gavroche.  As an independent actor and singer, this is his first theater role after working on two short films.

“I wanted to do ‘Les Miserables’ because it’s a famous and renowned work,” Marin said. “I also really wanted to keep singing and performing at the same time. Doing so in front of a live audience has been a thrilling experience.”

The second thing that sets the production apart from others, explained Gregg, is the spectacle of the performance on stage: “We refused to be limited by what the stage alone provided us. Instead, we built bridges over the pit where the orchestra plays that leads to an island the audience.”

Additionally, the production uses the aisles as a performance space. “Similar to how Paris Grand Opéra use the most advanced technology in their shows, we’ve been using new lighting technologies in cutting edge ways for spotlights,” Gregg added.

The cast and crew have diverse backgrounds and interests and have been working together since mid-January, with six days of four-hour rehearsals a week.

This show will run through April 19.  To purchase tickets, learn more about Ram’s Head Theatrical Society, or to find out more about future performances, visit http://www.stanford.edu/group/rams-head/