Milpitas, California kids wrap up a successful run of ‘The Wiz’

• Children’s theater is supported by the City of Milpitas 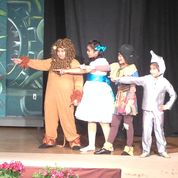 Along with her friends, the Lion (MJ Suarez), Scarecrow (Sarah Do), and Tinman (Jenika Fernando), Dorothy (Fenina Suarez) searches to find the Wiz who can help her find her way back home to Kansas City. PHOTO BY ALEXANDRA DRECHSLER/INQUIRER.net

Milpitas, California—Fresh from concluding their performances of “The Wiz,” Center Stage Performing Arts (CSPA) wraps the entertaining musical featuring Dorothy, the Scarecrow, the Tinman, and the Lion that is also making waves in Manila.  Spearheading all of the CSPA productions is artistic director, Mei-Wan Chai with support from the City of Milpitas, friends, family, and theater lovers.

Commenting on the overall turnout for the show Chai said, “The results from the shows were great.  We have always had a very responsive crowd and I have heard such positive feedback from audience members after the performances.”

Mei Wan is also the founder and owner of the CSPA whose mission is to provide a platform for the youth where they are able to showcase their talent through the performing arts to the community.  They work with youth and young adults in a safe, expressive, and structured environment.  The programs they run foster their development, learning, creativity, and social skills.

Chai stated, “After holding two days of open auditions, we selected our cast.  All that we ask of our cast members is to work hard, show dedication, come with a positive attitude, and have a memorable experience.”

Chai selected to perform “The Wiz” after her own children performed this back in 1996.  She recalled the special memories she held from their performances and vividly remembers the enjoyment her children had and wanted to give other kids and families the same opportunity to witness, practice, and experience the yellow-brick road.

She further adds, “Typically we rehearse for 2-3 hours a day about 3-4 times a week.  The duration of rehearsals very and we start preparing 8-14 weeks prior to opening night.”

The cast was comprised of a diverse group of members.  CSPA emphasizes the importance of having a diverse cast as to include as many people as they can.  They are proud that they have a wide range in their cast in regards to age, ethnicity, and experience.  Their cast typically consists of elementary, high school and college students.

“With so many talented children, it is sometimes challenging to decide who to cast.  Unfortunately, not everyone who auditions is cast,” Chai states.

Filipino talent was evident in the cast where three out of the four main roles were of Filipino decent.  Fenina Suarez was cast as Dorothy, MJ Suarez as Lion, and Jenika Fernando as Tinman. Additionaly, Jeznie Molo was a part of the Ensemble.

As a community production, the set was designed by Chai and painted by a CSPA participant parent, Mildred Andal.  The choreographer who worked to teach the actors their dance steps was Gina Chai.  Lucrene Mottaz worked with the cast to perfect their songs as the vocal director while Bobby Rodrigues worked as the theater assistant.

“We know it’s hard to perform in front of so many people, but the cast did a great job of giving their full effort each time.  We’re very proud of the cast considering this is a younger age group, there were a handful of new participants, and a few cast members were sick,” said Chai of the cast’s performance.

Working to grow and give more chances to participants, they are developing and creating new programs to help individual talents learn more about directing, choreographing, and technical aspects of the show.

Their next production will be of Jungle Book for ages 7-14. Center Stage is currently taking applications to be a part of this shows as everyone is casted.  Rehearsals for this begin May 13 with performances on July 9-11.  Additionally, their production of Legally Blonde will be for ages 8 and over.  Auditions will be held on May 5 and 6 with performances July 25 – August 2 at the Milpitas Community Center.