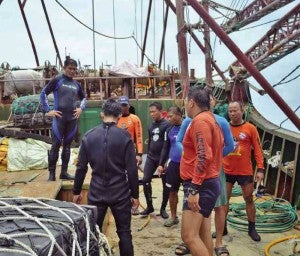 MANILA, Philippines—The Cagayan Municipal Trial Court on Wednesday ordered the arrest of two members of the Philippine Coast Guard involved in the shooting incident in the Balintang Channel.

The two were charged with the preparation and submission of a falsified Monthly Gunner Report on the incident.

In the complaint filed by the National Bureau of Investigation (NBI), which was affirmed by the DOJ,  Dela Cruz and Bendo submitted two monthly gunnery reports with different results.

“We find that there is probable cause to charge respondents Bendo and Dela Cruz for obstruction of justice as the signatories to the (2) versions of the monthly gunnery report which were submitted during the investigation of the incident,” the DOJ said in a resolution dated Dec. 20, 2013.

The DOJ said an accurate and honest report was vital because “the number of bullets or shells [fired during the incident] is crucially material to the outcome of any investigation.”