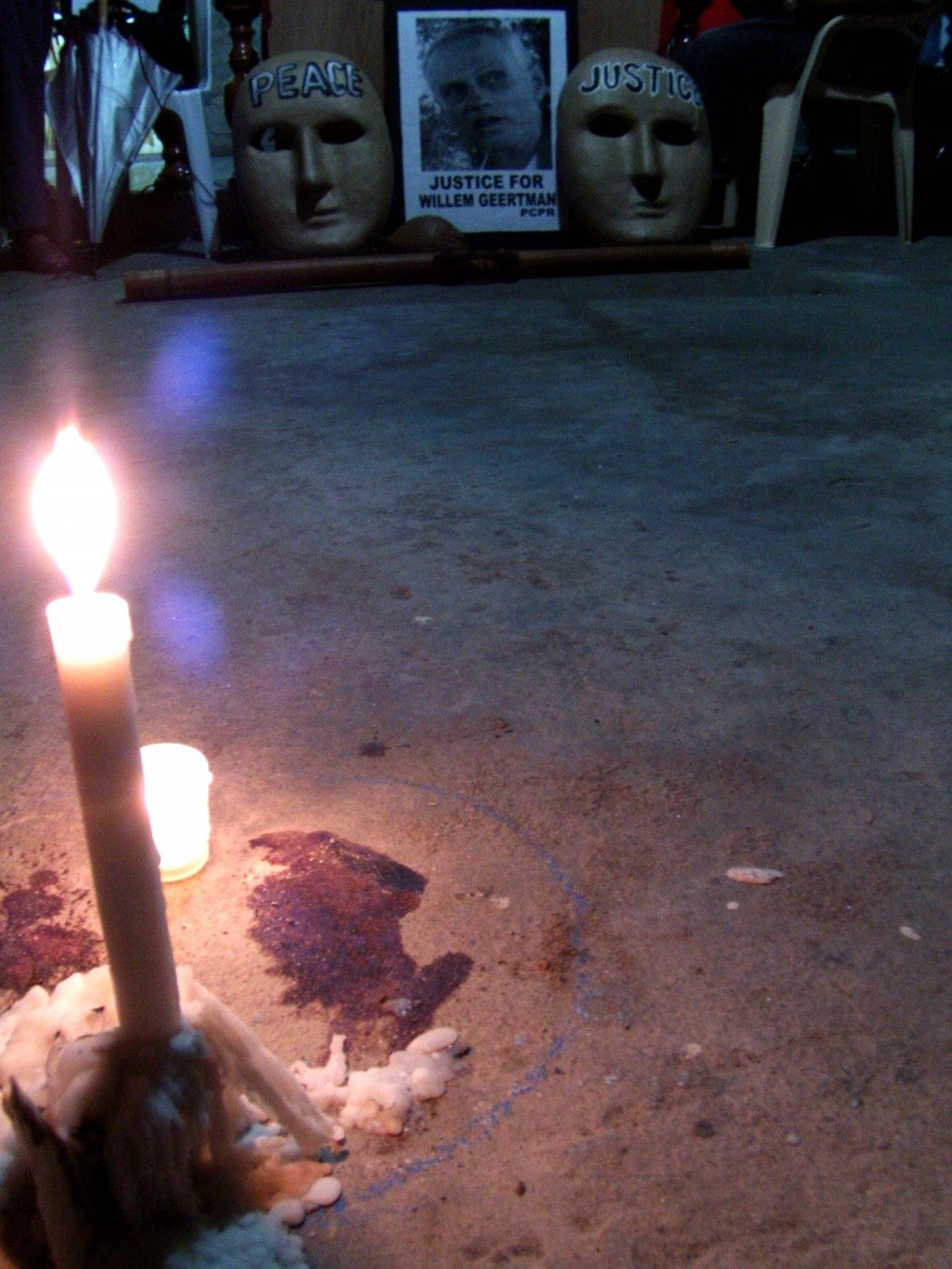 In this July 6, 2012 file photo, candles are lit at the very spot where Dutch environmental activist Wilhem Geertman, a former religious missionary who helped poor farmers affected by illegal logging and mining, was killed allegedly in a robbery attempt in San Fernando city, Pampanga province, north of Manila, Philippines. AP

MANILA, Philippines — The Philippines is the deadliest Asian country for environment and land defenders, a report from a London-based group said.

Global Witness, a group that seeks to shed light on the links between environmental exploitation and human rights abuses, said the Philippines is the third in the world with the highest number of killed environmental and land defenders, at 67 deaths since 2002.

The deadliest country is Brazil with a whopping 448 deaths while second is Honduras with 109 deaths, the report read.

“Parts of Asia also account for significant numbers of killings of defenders. A contributing factor could be that, like South America, some Asian countries have strong social movements and awareness of rights, with good civil society monitoring of environmental and land issues,” the report read.

“The Philippines is the worst-hit country in Asia with 67 known killings, the majority over mining conflicts,” the report added.

The report said of the 67 activists killed, 41 were opposing mining or extractive operations.

The report also said the violence stems from opposition to land-grabbing and deforestation.

Of the 67 deaths, only two were imprisoned, the report said. “The vast majority appear to enjoy total impunity for their crimes,” it added.

The report also said that there is evidence that the “killings were at the behest of private sector interests or political actors.”

“(S)tate forces are suspected of being behind the killings. Key state institutions, including the judiciary and law enforcement agencies, are weak and the military and police are known to commit human rights violations with little accountability,” the group said.

The group said 14 killings were attributed to armed forces, three to local government officials and two to the police.

The study cited the most famous environmentalist killing in the country – Dr. Gerry Ortega , a well-known environmentalist and vocal critic of illegal logging, who was shot dead in Palawan last January 2011.

Tagged as mastermind are former Palawan governor Joel Reyes and his brother, former Coron mayor Mario Reyes, who both went into hiding after a regional trial court issued arrest warrants in March 2012. The appellate court cleared the former governor of the charges in October 2013, but the Reyes brothers have remained at large since.

The report also cited the “harrowing case” of Juvy Capion, who with her two young sons, was allegedly shot dead by members of the 27th Infantry Battalion in South Cotabato. The report quoted a fact-finding mission that said soldiers “peppered” Capion’s house with machine gun fire before bringing outside their bodies and leaving them outside to rot.

Juvy, an indigenous anti-mining activist, was the wife of Daguil Capion, a leader of the B’laans indigenous peoples in the province. Juvy’s husband Daguil, a member of the communist armed group the New People’s Army, has taken up arms against the Tampakan Gold Copper project, which has been condemned as it lies close to an active volcano, the report said.

“We don’t tolerate or condone human rights violations and we hope Global Witness can work with us to pinpoint any soldier or officer involved in those killings,” Tutaan said.

The Global Witness report also cited the case of couple Manuela and Expedito Albarrillo who were found dead in Mindoro Oriental on April 8, 2002, the report said, adding that eight armed men used force to remove the couple from their hut. Both were active in opposing mining operations in the province.

There is also the case of indigenous leader Jimmy Liguyon, who was shot dead in front of his family on March 5, 2012 in Pampanga. The report said Liguyon, who was also a barangay (village) chief, may have been killed for not signing a signing a certificate of ancestral domain to grant mining rights for an area of 52,000 hectares inhabited by the Matigsalog tribe in San Fernando.

Also, Romeo Sanchez, leader of the Save the Abra River Movement (STARM), was shot dead in Bagiuo City, Benguet, on March 9, 2005, the report said. Sanchez was a campaigner against mining in the Ilocos and Cordillera regions. – with The Associated Press

Read Next
DFA grants visa-free privilege to 7 countries
EDITORS' PICK
Duterte blasts rights groups for overlooking the ‘other side’ of drug war
Leaked: A 60x Zoom and all-new Helio G96 mean a complete overhaul for TECNO Mobile’s new CAMON 18 series
153 protests filed vs China actions in PH waters in 2021 — DFA
Next level mobile photography within reach with vivo X70 co-engineered with ZEISS
Delivering delight against all odds
Lacson wants DOF to suspend TRAIN law as oil prices rise
MOST READ
Robredo to supporters: Be calm, gentle and do good deeds
Duterte inaugurates P684-M bypass road project in Quezon
Matibag calls Senate budget hearing ‘political,’ gets kicked out
Duterte: No drug dealers among the rich in PH
Don't miss out on the latest news and information.