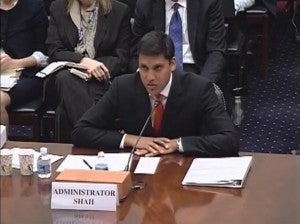 WASHINGTON, DC – At a full House Foreign Affairs Committee hearing April 9 on U.S. foreign assistance for 2015, Chairman Ed Royce, a Republican from California questioned the USAID on the lack of land rights in developing nations, including the Philippines.

Royce, a longtime champion of property rights, had raised issue of land grabbing in the Philippines with senior government officials in the Philippines, including President Benigno Aquino and Foreign Secretary Albert Del Rosario.

Royce asked USAID Administrator Rajiv Shah what the agency was doing about the problem, citing a December Huffington Post article “Lessons from the Past: Securing Land Rights in the Wake of Typhoon Haiyan.”

Royce said the article quoted a USAID official saying that unequal access to land is a central issue that cuts across both rural and urban sectors in the Philippines.

He added that “with all the assistance funding we’re providing to Manila, isn’t it time that USAID and the administration focused on this issue given what’s at stake? For three years, I’ve asked the administration to make land grabbing a priority, and for three years, I’ve received emphatic support verbally. Three years later, I see no progress. Will this year be the year where we finally make a difference?” 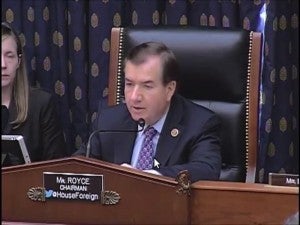 In reply to Royce, Shah emphasized that “USAID could commit FY’14 resources” to work with the government on anti-corruption enforcement, community policing, support for the land management office as well as with local communities to help  address  the problem of landgrabbing.

“In the Philippines, 46 percent of the 24.2 million parcels are titled,” said Shah, but corruption and “ineffective respect for those titles hamper the ability of many poor families to secure their future.”

Shah expressed appreciation for working with Royce on property issues, thanking him for his visits to the Philippines and his works with USAID program.