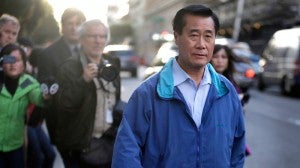 MANILA, Philippines–Justice Secretary Leila De Lima on Wednesday confirmed that the National Bureau of Investigation is already looking into the circumstances surrounding the attempt of California State Senator Leland Yee to smuggle high-powered firearms from the Philippines to the US.

While she is not sure if the US government made a request for assistance to the Philippine government, De Lima said the NBI is already verifying some facts about the case, especially the travel records of Yee to the country.

“I’m not sure if there is already an official request coming from the US government probably coursed through our Interpol-NBI but of course it is something that interests us,” De Lima said.

“We are looking into certain facts, certain information as narrated in that news item…The NBI is doing some verification but as to exactly what these are we cannot disclose them to you. That’s whether or not there is an official US request we felt that it is important to us also to try to verify especially the supposed travel of that US Senator here in the Philippines,” she added.

She added that the NBI already has an initial report on the matter though De Lima refused to disclose its details.

Sought for comment, lawyer Daniel Daganzo, the head of the NBI’s Interpol Division, said the US has yet to communicate with the bureau to seek its help in the investigation.

Yee was arrested by the US Federal Bureau of Investigation on charges of corruption and alleged conspiracy to smuggle and trade firearms from the country.

The FBI said Yee was in touch with one Wilson Lim who used to be based in Mindanao but now living in California. The latter allegedly had contacts in the Armed Forces of the Philippines (AFP) for the high-powered firearms that would be smuggled into the US.

According to the FBI, Yee also disclosed to an undercover agent that the source of the weapons was a Filipino citizen who previously sold guns to individuals, and even managed to bring guns to the US from Cagayan de Oro City, and the procurement that will be made by US troops.