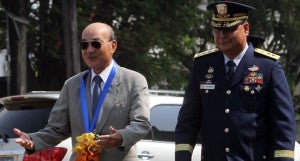 MANILA, Philippines – “We have vowed never to wage war again” was the promise of Japanese Ambassador Toshinao Urabe to war veterans during the Philippine Day of Valor (Araw ng Kagitingan) on Wednesday at Bataan.

The envoy, in behalf of his country, expressed “heartfelt apologies and deep sense of remorse” for the “inexplicable suffering” experienced by Filipinos during World War II when Japanese forces occupied the Philippines.

“Japan has learned valuable lessons from history. The use of force [is] not the ultimate solution. It only creates problems,” Urabe said during his televised speech at Mt. Samat Shrine in Pilar, Bataan.

He said Japan spent the last seven decades working with and helping the Philippines to “validate [its] resolve.”

“Fortunately the filipinos have accepted to move on. We have been building the future together ever since,” he added.

The Day of Valor or Bataan Day commemorates the fall of Bataan during World War II. The surrender of Filipino and American soldiers to Japanese troops paved the way for the infamous Bataan Death March that resulted in thousands of deaths.