• US Army Specialist was injured by an IED in Iraq

• Soldier was born in PH and raised in Guam 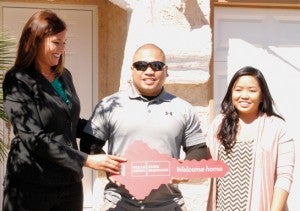 The bank committed $30 million, and to date has turned over 116 homes to military veterans and their families.

Daggi and his wife, Nikki, were first honored with the house during the 2013 Las Vegas Bowl Game. The 1,800-square foot home in North Las Vegas includes four bedrooms and is fully renovated with new flooring, appliances and landscaping. The couple was also given a $20,000 gift certificate from La-Z-Boy Furniture to furnish the interior.

Born in the Philippines and raised in Guam, Daggi served in the US military, following the footsteps of his father and grandfather.

During his last tour in Iraq five years ago, Daggi was awarded a Purple Heart after his Humvee blew up from a vehicle-borne improvised explosive device.

“It’s really humbling that these [foundations] remember the veterans. There are a lot of veterans who don’t know about the program. This program is real and it’s out there for you—you just have to apply,” Daggi said.

Daggi is still undergoing therapy for his injuries but has returned to school to study nursing with a promise to help other wounded veterans.