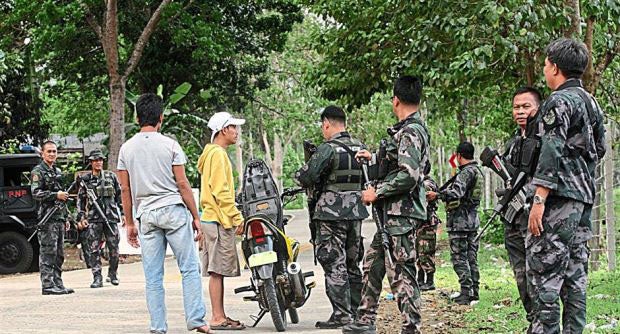 Members of the Philippine National Police (PNP) 52nd Special Action Company conducting a security check on motorists at a checkpoint in Indanan Village, Sulu province in the Southern Philippines. The Star-Asia News Network

KOTA KINABALU — A cat-and-mouse game is playing out between Philippine security forces and Abu Sayyaf-linked mercenaries holding two women hostages who are trying to slip into Jolo island.

The gunmen, who abducted Chinese national Gao Huayun, 29, and Filipino resort worker Marcy Dayawan, 40, from Semporna on Wednesday, are holding out in Pandami island which is a four-hour boat ride to Abu Sayaff’s lair of Jolo in the southern Philippines.

Philippine National Police Sulu provincial chief Superintendent Abraham Orbita said they had received word that the gunmen and their captives had landed in Pandami island.

“This appears to be quite credible. One of the gunmen is said to be a native of Pandami. We are verifying all this information,” he said.

Orbita said the gunmen were possibly facing difficulties in getting their captives into Jolo as Philippine security forces were keeping a close watch on entry points there.

Based on information from Philippine police, he said the kidnapping was carried out by mercenaries with Abu Sayyaf links.

Philippine military has identified the group led by one Murphy Ambang Ladjia aka Haji Gulam, who is a former Moro National Liberation Front sub-commander who joined an Abu Sayyaf unit in Tawi Tawi’s Simunul area led by Binang Sahirol.

Gulam, who is a native of Pandami, allegedly snatched the two women on Wednesday and headed to Tawi Tawi before fleeing into the Sulu islands in the past 48 hours.

Initial reports indicated that the gunmen’s movements were thwarted by a Philippine naval blockade that had been in place for nearly a year in their attempt to capture former MNLF chairman Nur Misuari.

However, Philippine authorities expect the gunmen to continue trying to find their way into Jolo to send the two women to one of the many splinter Abu Sayyaf groups.

If the gunmen are able to get their captives into Jolo, they are likely to begin making ransom demands known in about two weeks, going by previous kidnap cases in the southern Philippines.

“The gunmen would likely try to contact Gao’s family directly,” Taiwan reports quoted Gene Yu, a Taiwanese official who was involved in securing the release of fellow citizen Chang An Wei who was abducted from Pom Pom Island Resort near Semporna in November last year.

Yu, a former US Army Special Forces officer and a nephew of the Taiwanese president, said Gao’s abduction seemed to have mirrored Chang’s case, adding that the latest incident was likely to have been “outsourced” to some mercenaries along with a few Abu Sayyaf gunmen.