No Filipinos hurt in Chile quake—DFA 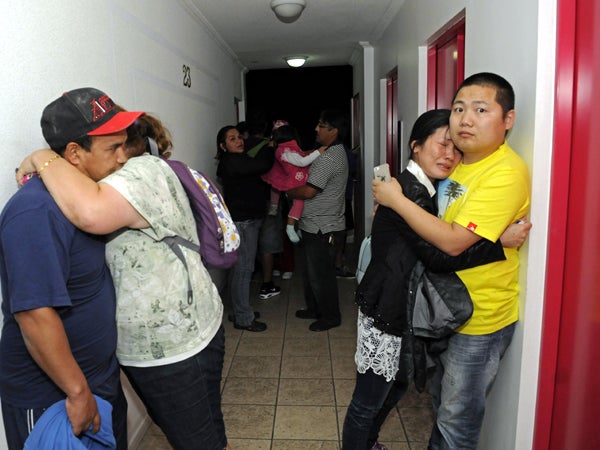 People embrace on the upper floor of an apartment building located a few blocks from the coast where they gathered to avoid a possible tsunami after an earthquake in Iquique, Chile, Tuesday, April 1, 2014. A powerful magnitude-8.2 earthquake struck off Chile’s northern coast Tuesday night. There were no immediate reports of injuries or major damage, but buildings shook in nearby Peru and in Bolivia’s high altitude capital of La Paz. AP

MANILA, Philippines—No Filipinos were hurt in the 8.2 magnitude earthquake that struck off the north coast of Chile early Wednesday, the Department of Foreign Affairs (DFA) said.

Read Next
Filipinos protest China’s blocking of supply boat
EDITORS' PICK
IATF: Food firms to operate with 50% of workforce during Luzon quarantine
BREAKING: 1,075 people in PH has coronavirus disease – DOH
Style and music journeys with Claudia Barretto
UP-PGH wards for COVID-19 patients finished in 5 days
Cebu City closes its borders
DILG to stranded workers: ‘Stay where you are’ until Luzon-wide quarantine is over
MOST READ
No more bread? Company forced to limit production
Koko Pimentel: Protocols may have changed over time
Another doctor dies due to COVID-19 in Cebu City, doctor-husband critical
Pacquiao to seek probe on leaked private letter from Barangay Dasmariñas
Don't miss out on the latest news and information.