Asean, US defense ministers look for lessons from MH370 search 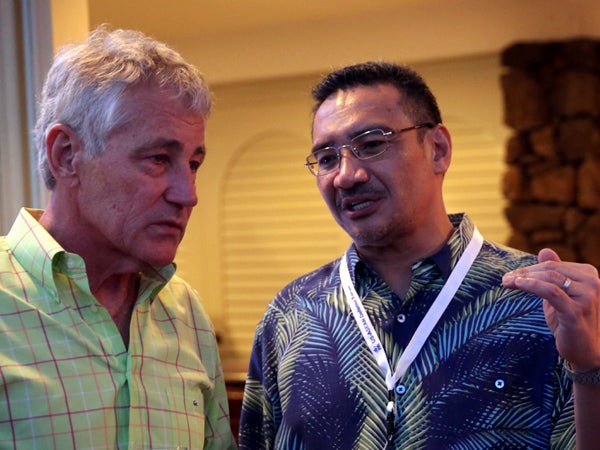 U.S. Secretary of Defense Chuck Hagel (L) listens to Malaysian Defence Minister and acting transport minister Hishammuddin Hussein (R) during a welcoming reception for Southeast Asian defense ministers April 1, 2014 in Honolulu, Hawaii. Secretary Hagel is in Hawaii to host a meeting of defense ministers from the Association of Southeast Asian Nations (ASEAN) on April 1 to 3. AP

HONOLULU — The specter of missing Flight MH370 will loom over a meeting of US and Asean defense ministers Wednesday, as they discuss how to improve their response to natural disasters and emergencies.

The agenda for the ministers gathering in Hawaii — focused on bolstering cooperation for humanitarian assistance efforts — has taken on new significance in the wake of the aviation tragedy, officials said.

The often confused search for the missing Malaysia Airlines jet has sparked criticism of authorities in Kuala Lumpur and raised questions about the ability of regional governments to take joint action in an emergency.

Pentagon chief Chuck Hagel said that he expected his counterparts to look at possible lessons from the recovery effort, which has yet to find a sign of the plane since it went missing with 239 people on board on March 8.

“We will get into some of this at our meeting over the next two days,” he said.

Malaysia’s Defense and Transport Minister Hishammuddin Hussein, who has served as the public face of the search effort, is attending the meeting, where he is expected to provide his counterparts an update on the search for the missing jet.

Hagel did not criticize Malaysia in his remarks but the government’s handling of the crisis has come under fire, especially by distraught relatives of the 153 Chinese nationals on board.

Singapore Foreign Minister K. Shanmugam last week called some of the criticism unfair and said Southeast nations lacked the military hardware to deploy in such a disaster, unlike the United States or China.

Washington has two naval P-8 surveillance aircraft taking part in the massive search of a remote stretch of Indian Ocean southwest of Perth, where the plane is believed to have gone down. The hunt turned up nothing on Tuesday.

The international effort, which involves 10 aircraft, naval ships and now a British nuclear submarine, has illustrated the need to forge regular cooperation before a disaster strikes, said a senior US defense official.

“I think on the one hand it has shown that we have a number of countries that can put aside their rivalries and differences and work together,” said the official, who spoke on condition of anonymity.

“On the other hand, it highlights that we have a lot further to go,” said the official, including more information sharing among governments.

The meeting of defense ministers from the Association of Southeast Asian Nations, the first to be hosted on US soil, will include a discussion Wednesday on how civilian and military officials can work together to tackle natural diasters.

As countries face the dramatic effects of climate change, “this kind of cooperation is going to be increasingly important for us and it’s going to require that we think differently about how we approach some of these problems,” the defense official said.

“The more we can work together in advance … the better,” the official said.

Hagel and the Asean ministers are due to pay a visit Wednesday to the USS Anchorage, an amphibious ship with a helicopter flight deck that the Americans say can be highly effective in disaster relief operations.