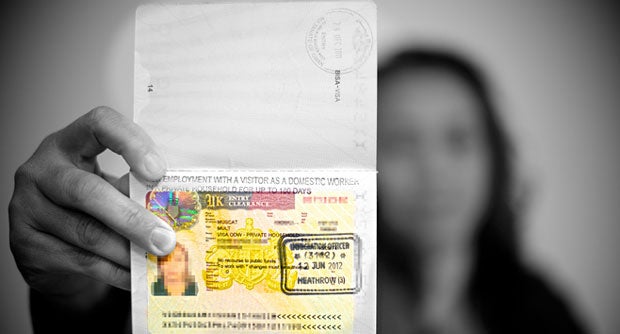 A domestic worker holds up her UK Overseas Domestic Worker visa. The New York-based Human Rights Watch (HRW) said migrant domestic workers, including Filipino women brought to the United Kingdom by their employers, are being subjected to serious abuses like forced labor. PHOTO FROM HRW.ORG

In a report released Tuesday, the HRW noted that the UK government’s inadequate efforts to protect vulnerable workers to the changing immigration rules make it harder for them to flee abuse.

“It’s scandalous that in modern Britain, migrant domestic workers are subject to such appalling abuses,” said Izza Leghtas, HRW Western Europe researcher, in a statement released by the group.

“But instead of protecting these workers, the system makes it harder for them to escape,” Leghtas said.

The 58-page report titled “Hidden Away: Abuses against Migrant Domestic Workers in the UK” documents the confiscation of passports, confinement to the home, physical and psychological abuse, extremely long working hours with no rest days and very low wages or nonpayment of wages.

The report showed that the UK government failed to live up to its obligations under international law to protect migrant domestic workers and enable them to access justice if they are mistreated.

Under the terms of the new “tied visa,” overseas domestic workers cannot legally leave their employer and find new work—meaning, those abused can become trapped.

Leghtas said workers who are mistreated now face a horrendous choice: either endure the terrible abuse or escape and become undocumented migrants, where they are much more vulnerable to further abuse and exploitation.

“It’s abhorrent that anyone should be tied into abuse in this way,” she said.

Because domestic helpers work in private households, much of the abuse takes place behind closed doors, the HRW said.

Workers told HRW of working up to 18 hours per day for weeks on end without breaks, not being fed properly and surviving on leftovers, being forbidden from possessing a mobile phone or contacting their own families and being unable to ever leave their employers’ homes unaccompanied. Some were paid wages as little as £100 (US$160) per month and sometimes even these meager salaries were withheld.

The British Home Secretary Theresa May is bringing forward a modern slavery bill to tackle serious labor abuses in the United Kingdoms. In December 2013, May presented a draft bill that would increase penalties for slavery, servitude, forced labor and human trafficking from 14 years to life imprisonment.

The bill, however, makes no reference at all to the plight of domestic workers. A parliamentary committee is reviewing the draft bill and is due to publish a report in early April.

The HRW appealed to the UK government to broaden the scope of the bill to ensure appropriate protections for migrant domestic workers, including the right to change employer.

It said restoring this right is vital to help combat abuse against this very vulnerable group of workers.

Every year, some 15,000 migrant domestic workers arrive in the United Kingdom. Many of those interviewed by HRW were women from Asia or Africa who previously worked for their employers in the Gulf and had already experienced abuse there at the hands of their employers.

The HRW said it had documented serious and widespread abuses against migrant domestic workers in the Gulf where gaps in labor laws and the restrictive sponsorship (kafala) system contribute to exploitation.

The kafala system ties a domestic worker’s visa to her employer and gives employers control over whether the worker can change jobs and, in some places, exit the country.

The UK’s abolition of the right to change employer risks sending a signal to employers from the Gulf that they can continue to treat their workers as they did under the kafala system, HRW said.

Under domestic, European, and international human rights law, the United Kingdom must protect migrant domestic workers from abuse, both from government officials and from private individuals.

Read Next
Daring fishers also in the minds of Ayungin defenders
EDITORS' PICK
DILG to stranded workers: ‘Stay where you are’ until Luzon-wide quarantine is over
BREAKING: 1,075 people in PH has coronavirus disease – DOH
Style and music journeys with Claudia Barretto
UP-PGH wards for COVID-19 patients finished in 5 days
IATF: Food firms to operate with 50% of workforce during Luzon quarantine
Cebu City closes its borders
MOST READ
Tootsy Angara bares neighbor wanted them out of village
Pacquiao to seek probe on leaked private letter from Barangay Dasmariñas
BREAKING: 1,075 people in PH have coronavirus disease – DOH
593 health volunteers sign up to fight COVID-19, says DOH
Don't miss out on the latest news and information.