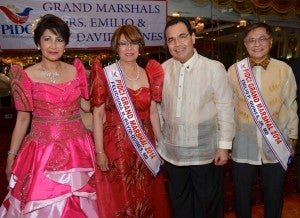 Emilio Quines told the gala guests, “Because of our spirit of togetherness or bayanihan in helping one another in times of need, such as during recent calamity typhoon Haiyan (Yolanda), and in times of sorrow.”

The title of Independence Day Parade Grand Marshal is one of the highest honors bestowed by PIDCI annually to an individual (or a couple). It recognizes an outstanding person (or a couple) whose contributions have positively affected the local community and the greater community as well.

The gala feted the grand marshals were with a Rigodon de Honor, a formal dance, where the dancers donned elegant barong Tagalog and Filipiniana dresses. There was a lively line dance number by the award-winning dance group Xquisite Dancers and a harana performed by the grand marshals’ family members and closest friends.

“This is the fourth time I’m addressing the grand marshal’s ball, and this is the biggest so far that I attended,” said Consul General De Leon in his speech.

“Tonight is also about giving honor to the two people who will play important roles to ensure the success of the Independence Day parade and other related events.