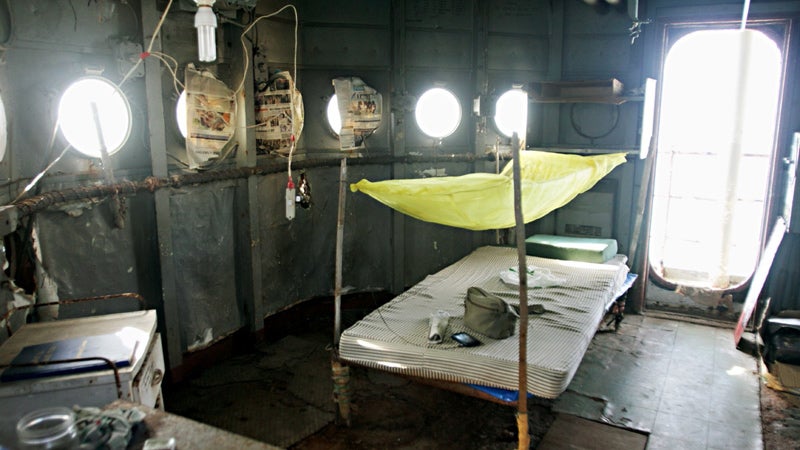 We were side by side with the BRP Sierra Madre, the dilapidated and rusty Navy ship that marks the Philippines’ territorial claim in this resource-rich area in the West Philippine Sea.

After the Navy personnel that manned the fisheries vessel AM 700 skillfully evaded the Chinese earlier that day, we knew instinctively we would be under tighter watch.

The two Chinese Coast Guard vessels that harassed AM 700 were on the west side, facing the Sierra Madre’s bow, on the side of Mischief Reef that China managed to wrangle from the Philippines in 1999.

At night, they were distinguished only by a light that appeared like a small yellow dot from afar.

Gato, 45, said the other ship was on our east side.

Shortly after midnight, as I and other journalists lounged near our boat’s stern, a very bright white light suddenly appeared.

The light beamed on what looked like a small fishing boat trying to enter Ayungin Shoal. It went on for some 30 minutes.

Gato said the bright light was actually moving toward us before it beamed on the little boat.

We spent most of the moonless night looking up to the sky as well.

The stars were beautiful but we were distracted by the moving bright lights that appeared to be hovering over us.

We could only guess if these were from US or Chinese aircraft.

Earlier in the day, as we were sailing in the West Philippine Sea, a gray-colored aircraft flew over us.

An hour later, a similar aircraft came flying by.

Several hours later, a different plane flew past us.

Photojournalists with their high-powered lenses were able to take pictures of these aircraft.

At least two aircraft had “US Navy” markings on them. 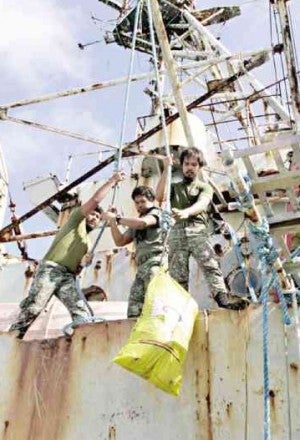 Another aircraft had what looked like a huge plate on it.

In Palawan province after the mission, military officials looked at the photos of the aircraft and told journalists they believed it was a Chinese plane.

On the first night we sailed, at around 8 p.m., we all rushed out despite the strong waves as some of those still awake saw a helicopter fly close by the AM 700’s starboard (right side).

It was too dark to take a picture of the chopper.

Another aircraft, with the same red blinking lights, flew by us again at around midnight on Saturday.

It was, indeed, a strange feeling to be watched at night—from the air and the sea.

None of the military officials we spoke to would say why these aircraft constantly flew past us.

So this was territorial defense, up close.

The ships, the planes. Our military needs them now.

Ayungin Shoal standoff: At sunset, I’ll jump into the water to enjoy what’s ours