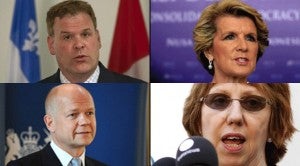 The agreement grants largely Muslim areas of Mindanao greater political autonomy in exchange for an end to the MILF’s armed rebellion.

A Bangsamoro autonomous region will be established to replace the current five-province Autonomous Region in Muslim Mindanao (ARMM), which President Benigno Aquino III has described as a “failed experiment.”

The peace agreement will be the basis for a basic law that would establish the Bangsamoro and which the two sides will submit to Congress for approval.

“The UK wholeheartedly supports the agreement. Its full implementation will bring great benefits for Mindanao and the Philippines. It will also be an inspiring example of how political leadership and democracy can rise above violence and division to provide the security and prosperity that all people want and deserve,” UK Foreign Secretary William Hague said.

“While many challenges lie ahead, I celebrate this important milestone along with friends of the Philippines around the world,” he added.

Canadian Foreign Minister John Baird called the peace accord a “historic milestone [that] paves the way for lasting peace, stability, development and long-term economic prosperity for the people of the southern Philippines and will redound to the benefit of all Filipinos.”

He said Canada “stands ready to assist” Filipinos and work with them to make the agreement a reality, implement it in good faith, and overcome the legacy of conflict.

Australian Foreign Minister Julie Bishop, on the other hand, reaffirmed her government’s support for the peace process, calling the agreement a “historic accomplishment on the path to achieving long-term security, stability and prosperity for the people of the southern Philippines.”

“I commend the commitment of all parties to negotiating a comprehensive and sustainable peace agreement. As both sides know, implementing the agreement will be critical to its success. I encourage all involved to build on these efforts during the next stages of the peace process,” she said.

Bishop recalled that last January, Australia announced an additional $6 million in aid for the next three years to help strengthen the peace process and boost the institutional capacity to implement the peace agreement.

“[The signing] will undoubtedly reenforce the willingness of all parties to take the necessary steps to implement the agreement. The EU, as a long-term supporter of the peace process in Mindanao, a member of the International Monitoring Team and a major development partner, will continue to lend its full support to the implementation of this agreement,” she said.

“And this is a very significant signal to others as well as in other parts of the world,” Najib said, toasting President Aquino at the Rizal Hall of the Palace.

President Aquino acknowledged that the peace agreement is a “shared achievement” with Malaysia.

“This evening, we are gathered in shared achievement and optimism. I believe I speak not only for my government, but also for all Filipinos in recognizing the tremendous personal initiative, risk and leadership displayed by Your Excellency, which helped us to secure an inclusive and peaceful future for our countrymen in the Bangsamoro,” Mr. Aquino said, toasting Najib.

With the signing of the agreement, he said peace was “indeed within reach.”