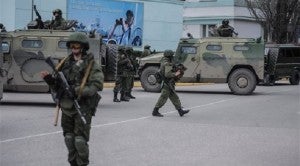 MANILA, Philippines—The Philippines has voted to reject Crimea’s referendum to break away from Ukraine and join Russia, the Department of Foreign Affairs (DFA) said Friday.

DFA said the UN General Assembly on Thursday voted to adopt a resolution that declares Crimea’s referendum as illegitimate.

“The Philippines voted to support the United Nations (UN) General Assembly Resolution on Ukraine based on its principled position on sovereignty, territorial integrity, rule of law, and peaceful settlement of disputes,” the DFA said in a statement.

“The Philippines likewise calls on all parties to respect the UN Charter and international law,” DFA added.

The DFA on Tuesday earlier said that the government   advocates a peaceful and diplomatic resolution on the issue and supports actions of de-escalation of tension between Ukraine and Russia.