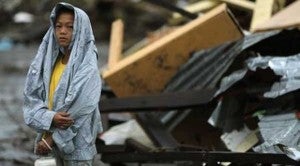 MANILA, Philippines — The Japanese government has provided the Philippines some P3 billion in grants for the rehabilitation and improvement of critical infrastructure projects across the Visayas, the Japanese Embassy in Manila and the Department of Foreign Affairs announced Tuesday afternoon.

Japanese Ambassador Toshinao Urabe and Foreign Secretary Albert del Rosario formalized the cooperation on March 25, signing agreements on projects that “focus on rehabilitation and improvement in the fields of infrastructure and communications,” the Embassy said in a statement.

Under the grant, P2.02 billion will support rebuilding efforts in areas devastated by Super Typhoon “Yolanda,” making good on the promise of sustained support that Japanese Prime Minister Shinzo Abe’s  made to President Benigno Aquino during their meeting in December.

The fresh funding “will provide Japan’s reliable disaster-resilient technology and urban planning” in rebuilding public infrastructure in Leyte and Samar.

“Through this program, Japan helps the Philippines to build a resilient society against natural disasters and achieve sustainable growth,” the embassy said

Some P506.5 million would fund the installation of better communications technology at the Philippine Coast Guard’s district offices and vessels at the Mactan Channel in Cebu.  It would also fund the establishment of a Vessel Traffic Management System for the sea lane.

According to the embassy, the assistance “aims to improve the communications capabilities of the PCG and enhance the safety, search and rescue activities in the Philippines.”

The remaining P512.2 million is earmarked for the improvement of the Water Supply System of the Metropolitan Cebu Water District.

Under the project, new water flow and pressure meters, and water quality sensors would be installed and monitored through a system called Supervisory Control and Data Acquisition, the embassy said.

This will pave the way for “efficient and effective water supply management of the MCWD within Metropolitan Cebu,” it said.