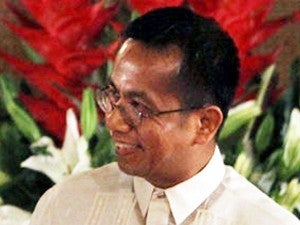 Socioeconomic Planning Secretary Arsenio Balisacan: Philippines is the only priority country in Asia under the Master Plan of Spanish Cooperation 2013-2016. INQUIRER FILE PHOTO

MANILA, Philippines—Spain has affirmed its commitment to aid in the Philippines’ development with the extension of a partnership that aims to fund projects promoting the rule of law, good governance and better disaster management systems.

The Philippines stands to benefit from a fresh 50 million-euro (P3.12 billion) grant attached to the four-year extension of its development partnership with the Spanish government that was approved this week.

“This agreement is the latest in our long history of close and friendly relations toward more meaningful development cooperation,” Socioeconomic Planning Secretary Arsenio Balisacan said in a statement.

Programs and projects under the grant extension are outlined in the Philippines-Spain Country Partnership Framework (CPF) for Development Cooperation 2014 to 2017.

Additional funds for financial cooperation and program-based aid will also be considered.

“We are honored that the Philippines is the only priority country in Asia under the Master Plan of Spanish Cooperation 2013-2016,” Balisacan said.

“We also appreciate the consultative approach taken by the Spanish government in the crafting of the CPF. This approach reinforces Philippine ownership of the priorities of our cooperation in line with the Philippine Development Plan 2011-2016,” he added.

The agreement was signed by Balisacan, who heads the National Economic Development Authority (Neda), and Spanish Foreign Affairs and Cooperation Minister Jose Manuel Garcia-Margallo, who is in Manila for an official visit this week.

On Monday, Garcia-Margallo said Madrid was eyeing the Philippines as its regional hub to allow Spanish companies to gain a foothold in Southeast Asia, one of the fastest-growing parts of the world.

Garcia-Margallo said Spain wants to take advantage of its historical ties with the Philippines as Spanish companies look for opportunities to invest in various industries, including infrastructure, tourism, manufacturing and agriculture.