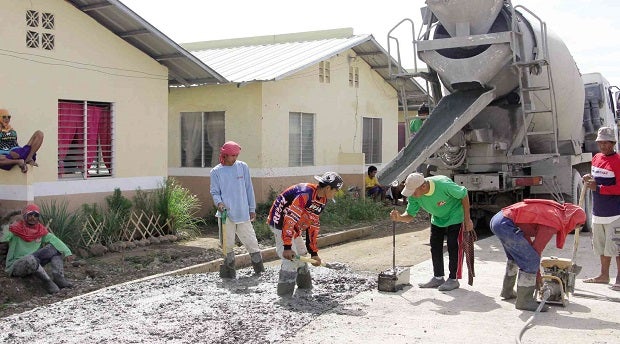 WHILE continuing to struggle with their loss and pain, survivors are still rebuilding their lives in resettlement sites in Cagayan de Oro City two years after. CAI PANLILIO/INQUIRER MINDANAO

He said Akio Isomata, of the economic affairs section of the Japanese Embassy in the Philippines, visited the city last week and personally handed over a check representing his government’s financial support for the project.

In a statement, the Japanese Embassy quoted Isomata as saying the Japanese government will also extend technical help to make the houses resilient to natural calamities.

Moreno said the city government had already identified a 15-hectare land in Barangay Balubal, about 15 kilometers east of this city, for the housing units.

The land sits on a plateau with a view of Macajalar Bay and the city’s coastline. It is near the posh village of Teakwood Hills, he said.

Ramon Fernandez, chief of the city’s Task Force Housing and Shelter, said the master plan for the relocation site was currently undergoing review.

“We want it to be a self-contained community where everything is within reach and you don’t have to go elsewhere to get your supplies,” he said.

Moreno said the houses would be much bigger than houses that had been given earlier to Sendong victims.

Because of the Build Back Better approach required by the Japanese government, the houses will be single-unit types and not the quadruplex type that was earlier given to Sendong victims.

The houses are expected to be distributed next year, Moreno said. Bobby Lagsa, Inquirer Mindanao