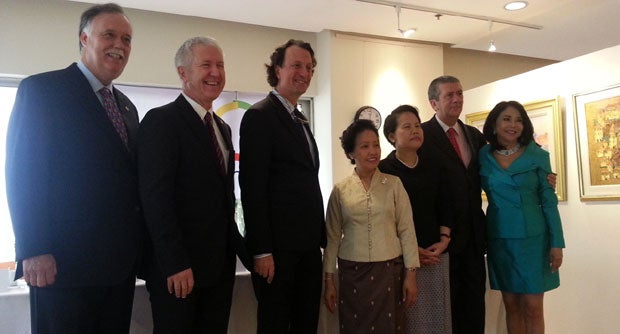 Ambassadors from French-speaking countries to the Philippines come together for the celebration of “La Francophonie” in the Philippines. Photo by Matikas Santos/INQUIRER.net

MANILA, Philippines – A new language can become the key to a better career and life.

“You have to think of languages as assets, every language you learn is a new asset,” French Ambassador to the Philippines Giles Garachon said Wednesday ahead of the international celebration of “La Francophonie,” a cultural event participated by French-speaking nations.

“It’s not only an intellectual asset because it opens windows to the world. If you learn French, it will open a window to the Francophonie world, not only to the French world but also to the Belgians, Swiss, Canadian, Laotian, and Cambodian worlds,” he said.

Learning a different language makes new opportunities available such as jobs and entry into universities.

Canadian Ambassador to the Philippines Neil Reeder also sees learning a new language as a way to build a better career and improve one’s life.

“It can help, if it provides you opportunities to make a better career, maybe in another country, then it’s a lot better than what you have today,” he said.

The International Organization of La Francophonie, established on March 20, 1970, has 57 member states and 20 observers in all five major continents of the world.

The population of French-speaking people all over the planet is estimated at 220 million making it the ninth-most widely spoken language.

“In today’s world it’s a requirement to learn English, and if you can learn more languages it will open your mind more, and you will learn more, the more open you will be to the world,” Garachon said.

The Ambassadors of Cambodia and Laos to the Philippines also shared their experiences with French culture being former French colonies. The Laotian Ambassador, Malayvieng Sakonhninhom, said that French is actually her first language because she went to a French school.

Garachon said that it would be greatly beneficial for people to learn as many languages as they can while they are still young so that they have a wide range of options.

“I think one of the targets of being educated is to learn a lot of information. If you learn information with only one language your scope will be a bit narrow. But if you learn many languages you will enlarge the scope of your mind,” he said.

“It should be a requirement in education to learn as many languages as possible,” Garachon said.

Filipinos already have an advantage in learning languages because most can speak at least three languages, Filipino, English, and the native language of their province.

“Already you start with three languages, this is the beginning of your educational life. Then if you learn more languages, since you have already a great capacity to learn languages, the better it will be,” Garachon said.

The Department of Education (DepEd) already has an ongoing program, in partnership with the French Embassy, where 12 public science high schools in Metro Manila and Central Visayas region teach French as an elective.

More than 1,500 high school students have taken the elective since the program began in 2012.

Asked about the general perception that it is difficult to learn a new language as adults, Garachon and Reeder said it is not true.

“It’s better if you are close to a language early in life, but that often isn’t the case. But it can be learned. Any language can be learned, it just takes a lot of discipline,” Reeder said.

Garachon traced the heritage of Filipino language saying that Spanish and French originated from Latin.

“In Tagalog you use some Spanish words and Spanish and French languages came from Latin languages so they are pretty close,” Garachon said.

“The Filipino culture is very rich and diverse, very communicative. People enjoy fiestas, having nice moments with people to share. [French culture] shares this with you, we love fiestas, we love to share friendships and nice human moments, so this is very common ground,” he noted.