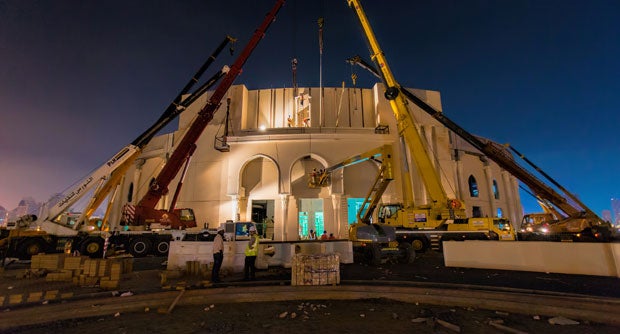 Al Majaz Island Amphitheatre, one of Sharjah Islamic Culture Capital Projects that cost $38 million (AED140 million) and took three months to build. It will be the main venue of “The Clusters of Light” theatrical production that will highlight Islamic culture.

“The projects complement the cultural manifestations and human heritage that chronicle Sharjah’s story of knowledge and science, promoting its status and key role in the international cultural system,” Sheikh Sultan bin Ahmed Al Qassimi, Chairman of the Executive Committee for the Sharjah Islamic Culture Capital 2014 (SICC) celebrations, said in a statement.

The 21 projects include universities, monuments, parks, markets, museums and libraries, and scientific and architectural edifices, it said.

One of the main projects that is set to be completed by end of March when the inauguration of Sharjah is set, is the Al Majaz Island Amphitheatre worth $38 million (AED140 million).

“Al Majaz Island Amphitheatre, which covers an area of 7.238 square meters and accommodates up to 4,500 spectators, is set to host on March 26, the premiere of ‘Clusters of Light,’ an epical theatrical performance that will launch the celebrations,” it said.

It is set for completion in a few days despite construction starting only three months ago.

“[Al Majaz] amphitheatre is fitted with the latest high-tech equipment that are unprecedented in the region and poised to produce outstanding performances,” Qassmi said.

Sheikha Bodour bint Sultan Al Qasimi, Chairperson of the Sharjah Investment and Development Authority (Shurooq) and Head of the Projects Committee for the SICC 2014 celebrations, said that their investments aim to promote culture and knowledge.

“The Sharjah government, led by His Highness Sheikh Dr. Sultan bun Muhammad Al Qasimi, Ruler of Sharjah, invests in everything likely to promote human thought, culture and knowledge, pointing to the sustainable nature of the emirate’s projects, which are poised to benefit generations to come,” she said.

The projects that are set to be completed in time for the start of the celebrations are an AED8 million monument, three parks that will add aesthetic and cultural value, universities and libraries to preserve and promote Islamic knowledge, history, and culture, and several “heritage villages” throughout Sharjah.

The celebrations for the inauguration of Sharjah begins from March 25 and ends April 5.