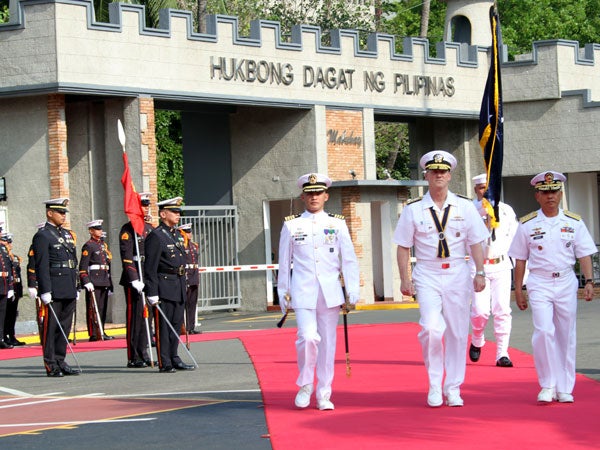 MANILA, Philippines– The USS Blue Ridge, the flagship of the United States 7th Fleet, is back in Manila.

The commander of the 7th Fleet, Vice Admiral Robert Thomas, arrived ahead of the ship and met with Navy chief Flag Officer in Command Vice Admiral Jose Luis Alano on Monday night.

He also visited the Navy Headquarters in Roxas Boulevard on Tuesday.

The USS Blue Ridge arrived on Tuesday at South Harbor for a four-day goodwill visit. US Navy data said that the US 7th Fleet based in Japan is the largest US numbered fleet, with 60-70 ships, 200-300 aircraft and approximately 40,000 sailors and Marines operating in the region on a typical day.

The goodwill visit came amid territorial disputes with China over the West Philippine Sea although the military officials of both countries made no mention of China.

The ship first visited in March last year. It is expected “to highlight the strong historic, community and military connections” between the US and the Philippines.

“I talked to Admiral Alano last night and we continue to learn from each other. For example, our joint Carat exercise serves as a model of how the Philippine and US Navies can cooperate and work together to address shared security concerns,” Thomas said in a statement.

“We have a saying in the 7th Fleet that when a friend is in need the 7th Fleet will assist whenever possible because that’s what friends do,” he also said.

He added that they are assisting the Philippines “to improve its maritime security capabilities. Key Philippine efforts include improving maritime domain awareness through development of long range aircraft and water borne patrols within the Philippine economic exclusion zone and enhancing integration among the national coast watch system. Key there is interoperability and integration.”

Activities such as staff-to-staff talks, sports events, professional exchanges and ship tour will be held during the visit.

Navy personnel will also be given a chance to study and familiarize with the ship’s weapons and communication systems.

Command ship of US 7th Fleet to dock in Manila