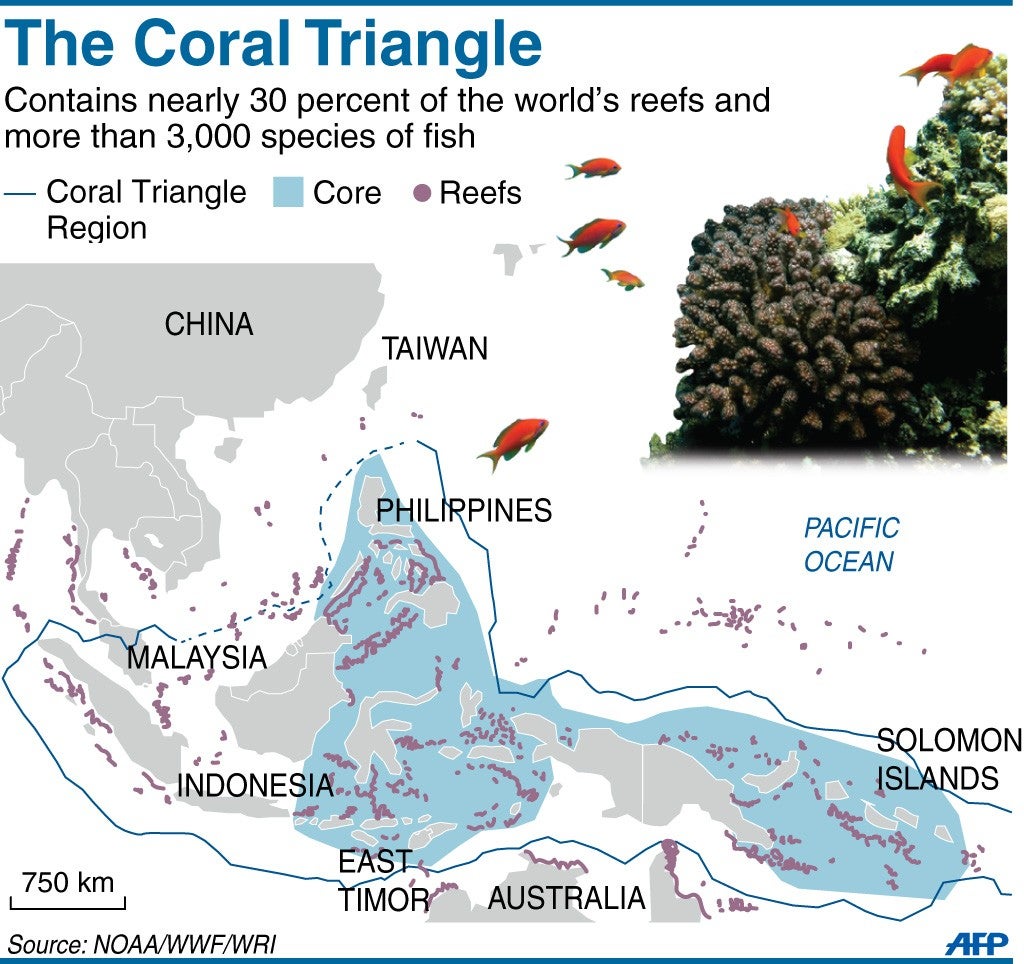 Graphic on Asia’s Coral Triangle, which contains nearly 30 percent of the world’s reefs and more than 3,000 species of fish. AFP FILE PHOTO

MANILA, Philippines — The Philippines has entered into a regional agreement establishing a permanent secretariat responsible

for the technical and administrative management of the Coral Triangle, one of the most biologically diverse regions in the world, of which the country is part.

Environment Secretary Ramon Paje recently signed the regional agreement setting in motion the establishment and operation of a secretariat for the Coral Trial Initiative for Coral Reefs, Fisheries and Food Security (CTI-CFF) based in Manado, Indonesia.

“This agreement clearly reflects the unique role of CTI-CFF in protecting and sustaining the world’s epicenter of marine biodiversity as a fully operational secretariat that will coordinate the implementation of the CTI Regional Plan of Action,” Paje said in a news release.

Paje signed the agreement personally presented to him by Dr. Sjarief Widjaja, secretary-general of Indonesia’s Ministry of Marine Affairs and Fisheries, and chairman of the CTI-CFF Interim Regional Secretariat, at the main office of the Department of Environment and Natural Resources  in Quezon City.

The Coral Triangle is considered one of the most ecologically rich regions in the world, bounded by Indonesia, Malaysia, Papua New Guinea, the Philippines, Timor Leste and the Solomon Islands.

It is home to 600 corals, comprising 76 percent of the world’s known coral species, and has the highest diversity of reef fish, with 2,500 species, or 37 percent of the planet’s reef fish concentrated in one area.

It is also the spawning and nursery ground for four principle market tuna species that populate the Western and Central Pacific Ocean—yellowfin, albacore, bigeye and skipjack — supplying close to 50 percent of the global tuna catch.

CTI-CFF is a multilateral partnership designed to safeguard the region’s extraordinary marine and coastal biological resources for future generations by promoting sustainable fisheries and livelihood, and climate change resilience and adaptation measures.

Paje said the permanent regional secretariat would play a central role in putting in place effective adaptation measures in the region, especially for coastal communities, to improve their resilience to climate change.

“The impacts of climate change are very real threats to us in the region and this agreement rolls out the full operation of the regional secretariat in May in time for the 5th CTI-CFF Ministerial Meeting in Manado, Indonesia on May 16, 2014 during the World Conference on Coral Reefs,” Paje said.

He said the agreement was reached during the 9th Senior Officials Meeting of the CTI-CFF Interim Regional Secretariat, which was hosted by the DENR in November last year.

Under the auspices of the Indonesian government, the construction of a five-story Regional Secretariat building on a 6,000-square meter compound provided by the provincial government of North Sulawesi is nearing completion. The compound will also house the CTI headquarters.