Newly appointed spokesman of the DFA Charles Jose says that he is happy to face the challenges of being the agency’s spokesman during these times where the Philippines is involved in a maritime dispute with China. Video by Matikas Santos

MANILA, Philippines – With a total of eleven years of experience in three diplomatic posts in China, the new spokesperson of the Department of Foreign Affairs (DFA) said Monday that he is ready to face the hot issues between the Philippines and China.

“I know being the DFA spokesperson will be a tough job, but I’m happy to take on the challenge of this position that was given to me,” Assistant Secretary Charles Jose told reporters Monday as he formally assumed the post as head of the DFA’s Public Information and Services Unit.

Jose was head of the Philippine Consulate General in Shanghai from March 2011 up to February 2014. 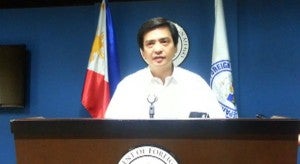 Before that, he was Consul General to Chongqing from February 2009 to March 2011.

He previously held several positions throughout six years in the Philippine Embassy in Beijing from January 1989 to July 1995.

“I think the biggest challenge for us is to be able to communicate effectively and efficiently, the DFA as well as the Philippine government’s position on the various issues that we are facing today,” Jose said.

“We would like our citizens to be informed of the various issues that are going on right now, and it is our job to be able to communicate to them,” he said.

The Philippines is facing a maritime dispute with China over the two countries’ claims in the South China Sea (West Philippine Sea).

An arbitration case is pending before the United Nations (UN) International Tribunal on the Law of the Sea (ITLOS) over China’s “illegal” claims.

Recently, there have been two incidents where Chinese Coast Guard (CCG) drove away Filipinos from maritime features that are located within the Philippines’ 200-nautical mile exclusive economic zone (EEZ).

The first was on January 27 when the CCG used water cannons against Filipino fishermen trying to fish in Scarborough Shoal and the second was on March 9 when two civilian contracted vessels were blocked from resupplying troops at Ayungin Shoal.

China has flatly rejected diplomatic protests filed by the Philippines against its territorial claims.

The Philippines is set to submit its memorial to the ITLOS by March 30, 2014. China has refused to participate in the proceedings.

Aside from his posts abroad, Jose also worked as Executive Director of the Office of Asian and Pacific Affairs (OAPA) from 2005 to 2007, Director of the North Asia Division in the OAPA from 1995 to 1997.

He also had a brief stint in Malacanang as Executive Director of the Office of the Presidential Adviser for Foreign Affairs from February 1997 to May 1998.

Jose is a graduate of Economics from the University of the Philippines (UP) Diliman in 1982 and has a Master’s degree in Southeast Asian Studies from the National University of Singapore.

Read Next
Palace hardens stand on increased US troops’ presence
EDITORS' PICK
POGOs not linked to Illegal online gaming, says Pagcor
Metro Manila now at moderate risk for COVID-19 — DOH
Pagasa: Storm Luis to exit PAR by Thursday
Do all the things you do, faster
Peeking inside the superb night camera features of the vivo V25 series
House energy committee chair Arroyo bats for cheap electricity
MOST READ
SC affirms conviction of ex-Leyte mayor for allowing illegal cockfights
Airlines cancel 2,000 US flights for Thursday
Remulla lambasts ICC chief prosecutor
Badoy not with Office of the President, NTF-Elcac, under Marcos admin — solon
Don't miss out on the latest news and information.