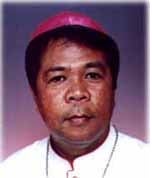 His Eminence Orlando Cardinal Quevedo made the announcement to priests in the archdiocese of Cotabato and diocese of Kidapawan Saturday night after he was informed by Papal Nuncio archbishop Giuseppe Pinto about Pope Francis’ announcement in the Vatican.

Father Jonathan Domingo of the Oblates of Mary Immaculate said the appointment of Bishop Dela Cruz as archbishop of Zamboanga was another blessing for Mindanao after Pope Francis named Archbishop Quevedo, an Oblate, as cardinal and member of the College of Cardinals.

Quevedo, the eighth Filipino cardinal and one of the two in active service, had his 5-in-1 celebration at the Immaculate Concepcion Cathedral here with President Benigno Aquino and Papal Nuncio as among his special guests last Tuesday (Mar. 11), four days before Pope Francis named Dela Cruz as archbishop.

Quevedo turned 75 last March 11 and celebrated his natal day with a thanksgiving mass for his appointment as cardinal, his priestly ordination and his 34 years as bishop and archbishop and the 75th year of OMI presence in the Philippines.

Dela Cruz of the Diocesan Clergy of Cotabato (DCC) has been the bishop of Kidapawan since June 2008 when then Pope Benedict named him as head of Kidapawan diocese replacing then Bishop Romulo Valles who was also named bishop of Zamboanga archdiocese.

Cardinal Quevedo said the priest who would succeed Dela Cruz as bishop of Kidapawan has not been named.

Currently, Dela Cruz serves as a member of the Catholic Bishops’ Conference of the Philippines (CBCP) Episcopal Commission on Social Communications and Mass Media and vice chair of the Episcopal Office on Women.

Cardinal Quevedo ‘a gift to Mindanao’