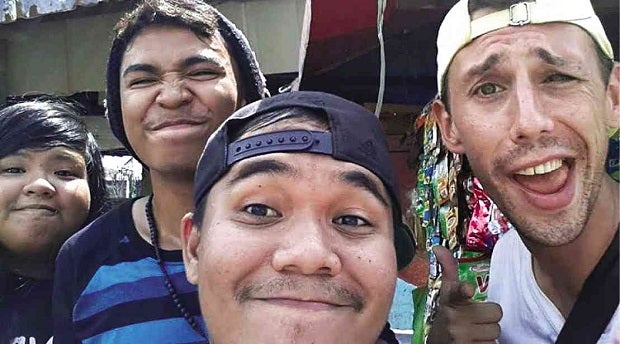 HAPPY FACES Quentin Musset (right) and the “stars” of his video showing the Filipino brand of resilience. QUENTIN MUSSET/contributor

The scene was almost surreal:  happy townsfolk and emergency workers getting their groove on, dancing on top of wrecked cars, on debris-strewn streets and alleys, beside ships swept inland by the storm surge, for a moment seemingly unmindful of the devastation around them.

It was the Filipino brand of resilience, a showcase that happiness can be found in movement, even for survivors moving forward four months since the devastation by Supertyphoon “Yolanda” (international name: Haiyan).

Titled “Happy—Philippines After Typhoon Haiyan,” the three-minute video was the “priceless” souvenir that Belgian Quentin Musset shot just before leaving Tacloban City earlier this month. He had spent more than two months in the disaster zone as a volunteer, traveling there on his own account with a friend after hearing news about the unprecedented impact of the typhoon.

“I thought making this video in Tacloban would be the best way to share the human experience I had there. Even if you lose everything, it’s still possible to be happy. We are stronger than we think. If you really integrate it—and it’s not easy—it’s a tool to fight against life problems,” Musset, who is turning 30 this month, told the Inquirer via e-mail on Saturday.

Vietnam-based Musset, who works in advertising and is “always trying to find the best way to share a message,” decided to make the video in hopes of showing the world the face of a city rising and rebuilding after the worst disaster it has gone through.

Set to the tune of American singer-songwriter Pharrell Williams’ infectiously upbeat “Happy,” the video has garnered more than 213,000 views (as of this writing) since Musset posted it on March 11.

“Actually, I only put a camera/mirror in front of Filipinos and their spirit with the right song at the right moment,” Musset said.

“I knew the viral potential it has, but I’m still so surprised how far it’s going from a simple Facebook post and without being pushed by the press. The feeling that your idea is getting a mass of people happy, proud or maybe understanding a human lesson, is priceless,” he said.

Musset shot the video just before flying back to Vietnam as he wrapped up volunteer work in Tacloban earlier this year.

He and his friend, Baudouin Nach, a fellow Belgian also based in Vietnam, first traveled to Tacloban a week after Yolanda hit on Nov. 8, 2013, in their desire “to do something good in our lives, live and see [the devastation] for ourselves and not just through television.”

Arriving without prior connection to any humanitarian group working on the ground, Musset and his friend were eventually taken in as volunteers of United Nations Development Programme (UNDP) for debris-clearing operations.

“It was the beginning of their operations so they needed people and probably liked that we were spontaneous volunteers,” Musset said.

At the time, he said, the sight of bodies of those lost in the storm was tough to take. It was hard to imagine “how only the wind and waves can destroy a city.”

But Musset drew strength from the locals themselves: “The Filipino spirit around helped me to save my mind and keep on working. Also the power of nature, how only the wind and the waves can destroy a city.”

Musset and Nach also encouraged others to pitch in and donate through their website www.standuptacloban.org. The “few hundred dollars” that they collected contributed some construction materials and relief items for the Tacloban survivors, Musset said.

“I have been living in Asia for two years and I realized that, as foreigners, we enjoy the cheaper living standards … But what are we giving back to those countries or people around? When Yolanda arrived, that feeling was probably the main reason of my motivation,” Musset said.

Musset and his friend continued their engagement with UNDP in January to monitor locals involved in UNDP operations in Tacloban, among the hardest hit by the supertyphoon.

It was “most memorable” for Musset when they saw a city already on the way to recovery upon their return.

“[We] saw how the city was partly recovered: people and shops on the streets, traffic jams, schools were open … There are still a lot of things to do, of course, but the comparison with when we lived there in November was a nice shock,” he said.

Wanting to share the experience to the world, Musset decided to shoot a video that would best capture this revival in Tacloban.

And while he had only two days to put it together before leaving, inspiration was not hard to come by.

“The first day I didn’t know any groups of dancers, so the only solution was to go to the barangays, explain and show the video concept and the message behind it,” Musset said.

He continued: “It wasn’t so difficult actually. They are so proud of their strong spirit and want to show that. Of course, most them were shy but often they would find dancers for me or the nice guy in the corner. I approached them simply, not like a foreigner with some heavy camera equipment.”

He also found a group of dancers rehearsing in front of a building.

The result: a three-minute video that people just couldn’t resist but share. The appeal is both simple and profound: If the devastated people of Tacloban could let loose, break dance and even do some krumping in their present circumstances, after losing their loved ones and their homes, what more could you?

In living with the people he had seen only on TV, Musset found out the answer for himself.

“The Filipino spirit made me stronger. Sometimes, happiness depends on you. Never give up. Don’t be afraid to come out of your comfort zone because that’s how we learn to face difficult situations,” Musset said.