China to US: Back off on sea row with PH | Global News
Close
menu
search

China to US: Back off on sea row with PH 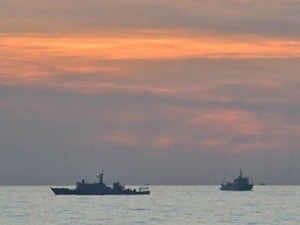 MANILA, Philippines — China told off the United States (US), saying it should not be involved in the maritime dispute in the West Philippine Sea (South China Sea) between the Philippines and China.

“Comments made by the US in disregard of facts are inconsistent with its non-party capacity,” Chinese Foreign Ministry Spokesperson Qin Gang said in a press conference in Beijing Thursday.

“It goes against US commitment of not taking sides on issues of dispute, has a negative effect on the maintenance of peace and stability of Southeast Asia and in the final analysis, does no good to the US itself,” he said.

“This is a provocative move that raises tensions. Pending resolution of competing claims in the South China Sea, there should be no interference with the efforts of claimants to maintain the status quo,” Psaki said.

The Department of Foreign Affairs (DFA) said that the two Filipino vessels heading forAyungin shoal were civilian ships contracted by the Philippine Navy to conduct troop rotation and resupply operations.

China however claimed that the ships were loaded with construction materials that were going to be used to build permanent structures on the shoal. China said this move by the Philippines infringed on their rights and interests in their territory.

The Philippines has a small detachment of marines stationed on the shoal with only an old grounded World War II era ship, the BRP SierraMadre, serving as their shelter since 1999.

China claims nearly the entire South China Sea as part of its territory including Ayungin Shoal which is 105 nautical miles from the coast ofPalawan, putting it within the 200-nautical mile exclusive economic zone of the Philippines.

China also claims Scarborough as part of its territory. The Philippines has effectively relinquished control of the shoal since the Scarborough standoff in April 2012.

China was provoked into expelling PH vessels from Ayungin–spokesperson