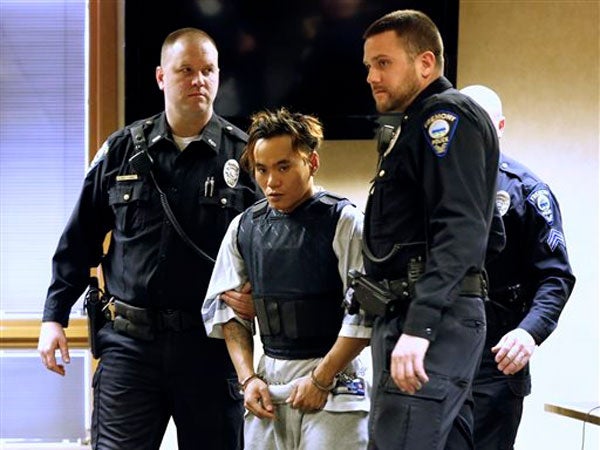 MANILA, Philippines – A Filipino was arrested for allegedly going into a shooting spree after hitting on a woman in an Ohio nightclub early Sunday morning (Sunday night in Manila), news reports said.

The gunman was identified as Igmidio Mista, who was charged with the murder of three people when he allegedly opened fire at the Last Call bar in Fremont, Ohio, News Net 5 in Cleveland reported.

Mista was arrested at a home in Fremont Monday morning (Monday evening in Manila).

“It is sad that an altercation in a bar went so terribly out of control. I am sad for all of the victims and their tragic deaths,” Police Chief Tim Wiersma said in the report. “All of the victims were from our community and, yes, one being a fellow police officer makes it even harder.”

Sergeant Jeffrey Harrison of Elmore police said in a statement that Chavez left behind a wife and two young children and had been an “exemplary” officer on the force for more than two years.

A fourth man who was shot at the bar, 25-year-old Ramiro Arreola, was flown to a Toledo hospital in critical condition.

In a separate news report by the Port Clinton News Herald, Arreola said that he, his sister and friends were in the bar when the Filipino gunman supposedly approached his sister.

“One of the guys was hitting on my sister,” Arreola said in the report. “Just being creepy. My brother-in-law said, ‘Hey man, that’s my wife. Back off. Just relax.’”

The gunman then pulled out his gun and started shooting, Arreola claimed.

“I don’t think he had a target. He was just shooting at whoever,” he said.

Mista was present on Monday’s arraignment but was silent, the report said.

Police said officers would contact with the consulate in the Philippines about Mista’s residency status, the News Net 5 report said.

The preliminary hearing is set on March 20. Mista is detained at the Sandusky County Jail.

Ex-officer killed after firing at US courthouse

Read Next
Palace awaits DND report on expulsion of PH ships
EDITORS' PICK
Comelec won’t proclaim party-list groups yet
House energy committee chair Arroyo bats for cheap electricity
Duterte signs law giving rights, more protection to foundlings
Honolulu Café is the cure for your Egg Tarts and Roastings cravings
DOJ-led panel drops 29 cases of torture, EJKs
Luxe property: A way to build, preserve wealth
MOST READ
Heart Evangelista gets a ‘no’ from Chiz Escudero after asking, ‘Do I deserve a bag?’
Pahiyas Festival back but tourists greeted with austere celebration
PH logs 110 new COVID-19 cases; active down to 2,487
Man posing as Marcos spox revealed to be an inmate in Bilibid — Guevarra
Don't miss out on the latest news and information.