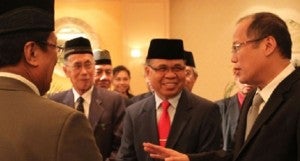 The tour of duty of the current International Monitoring Team (IMT), , led by Malaysian military officers, will end on March 12, according to the statement of the Office of the Presidential Adviser on the Peace Process (OPAPP).

It said the IMT Mission 9 would replace the current group whose mandate has been set to end on March 12.

While the tour of duty of the IMT expires in March, both peace panels agreed to extend its mission until March 2015. Malaysia has been leading the team since 2002.

“I was told that of the 36 personnel, 14 will be Malaysians, Indonesia and Brunei will have nine observers each, Japan and Norway with two each,” he said.

Al Haq said he was both sad and happy with the departure of IMT-8.

Malacanang earlier said the agreement would be signed before the end of March as stipulated in the road map to peace in Mindanao that President Aquino laid out in consultation with Mindanao peace stakeholders.

The talks that began in 1997 was aimed at ending four decades of armed conflict in southern Philippines which arccording to Cardinal Orlando Quevedo was borne out of mistrust among negotiating parties and the crushing poverty being suffered by the people.