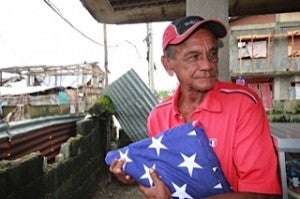 WISHING FOR AMERICA. Jaime Noveda, an elderly Amerasian from typhoon-stricken Palo town in Leyte province, is resigned to his fate that he may never make it to the United States. DANNY PETILLA/CONTRIBUTOR

PALO, Leyte—They call him “Amerikano (the American).” With his good looks and legs of pure muscle, women prefer Ronnie Philips Ulbrichts to be their pedicab driver when they go around town.

But despite his obvious appeal to passengers, the 48-year-old Amerasian plies his lowly trade every day with an inner pain.

“I’ve always wanted to be with my father in America ever since I was small. Obviously, that has not happened,” Ronnie said in Waray-waray.

Ronnie and his older brothers—Ernest, 50, and Patrick, 57—are the products of an illegitimate union between their mother, Consolacion Fuentes, a native of Gacao village in this town, and Rudy Carl Ulbrichts, a US Air Force serviceman assigned to the then Clark Air Base in Angeles City, Pampanga province, in the late 1950s.

Ronnie, Ernest and Patrick are just three of the estimated 20 Amerasians in this town and part of the 52,000 more in the country who are chasing lifelong dreams of joining their fathers in America and leading better lives.

But even with American blood in them, they continue to be discriminated against and denied the chance to live in America.

In a Catholic country that stigmatizes illegitimacy, Amerasians also bear the burden of dealing with something beyond their control.

Their wishes of becoming Americans have been largely frustrated by a US law that bars Filipinos of American parentage from becoming US citizens. That law is the Amerasian Immigration Act of 1982, which welcomes Vietnamese, Korean, Thai, Cambodian and Laotian Amerasians to come to America to join their fathers.

The law excludes Filipinos and Japanese.

March 4 is International Amerasian Day. Its observance last week dramatized the neglect suffered by the abandoned children of broken Filipino-American families with the end of the United States’ 94-year military presence in the Philippines in 1992.

Half a world away in the United States, Ronnie’s 83-year-old American father, Rudy, sits at BrightStar Care’s nursing home in Minneapolis, Minnesota, waiting for any news about his three sons from this town.

In the 1960s, as Rudy roamed the world fighting for America, Consolacion decided to go home to this town and raise their sons here. Consolacion, who died in 2000, never had the chance to join Rudy in the United States.

“My father is a good-looking man. I respected him,” Ronnie said, describing the time he spent with his father during a family outing in Baguio City in the 1970s.

“He showed me his car and told me: Ronnie, I want you to have a car like this,” Ronnie recounted.

Contacted in his room by phone in Minnesota, the elder Ulbrichts was informed about his sons’ wishes to join him there. He seemed confused about the sudden phone call and said: “There’s a lot of crap going on. I need receipts.”

His mistrust of people has a basis. According to his son, Ernest, their father was mugged and left for dead in his hometown of Seattle, Washington, three years ago before he decided to relocate and retire in Minneapolis.

His white skin darkened by exposure to the searing tropical heat while driving a pedicab every day, Ronnie has come to accept that he might not have the chance to join his father in the United States—ever.

“I know I’m getting old. But what is important is that he has come to accept me as his own son,” Ronnie said.

Although he did not finish his education, Ronnie is happy being a pedicab driver, which has allowed him to support his wife, Judith, 41, and three children—Julie Fay, 13, Ronnie Jr., 12, and Rhea Joy, 3.

Rudy thought of bringing his three sons to the United States but he never took the first step of filing paternity petitions before they turned 18 years old, as required by the 1982 law, virtually eliminating any chance for them of joining him in America.

“Despite our father being absent all our lives, he sent us money and helped us build our house,” Ernest said. “Some of the fault is ours. We could have pressed him early on to bring us to America but we did not.”

But thanks to the global attention to this town brought by Super Typhoon Yolanda (international name: Haiyan) and the “pivot to Asia” policy of US President Barack Obama calling for increased military presence in the region, that dream may be open again to Filipino Amerasians in the Philippines.

“I know my father is dead. But it would be nice to touch base with my brothers and sisters, if I have any, in America,” said Jaime Noveda, a 67-year-old retiree and son of James Branson, an African-American soldier of the US Army who lived in the US capital of Washington, DC.

Noveda was born a few weeks after his father left his mother, Presentacion Noveda, to go back to the United States following the end of World War II. Despite America’s door being slammed shut on him because of his age, he has no regrets.

“My mother told me a little bit about my father. To me, that is enough. I am honored to have known him, even though I did not get to see him in person,” Noveda said.

There have been efforts in US Congress to correct the 1982 Amerasian Act to include Filipino and Japanese Amerasians. But the chief sponsor, US Sen. Daniel Inouye of Hawaii, died in December 2012, leaving no leader in Congress to advance their cause.

Writing in The New York Times on May 27, 2013, Christopher Lapinig, a Filipino-American law student at Yale University, urged the American government to revive the cause of the Filipino-Amerasians, noting that Obama was about to make his “pivot to Asia” policy.

“The United States has an opportunity for redemption—to make sure that Filipino-Amerasians are not left behind by the ship again,” Lapinig wrote.

Whatever happened to Filipino war brides in US