Unicef: Long road to recovery for children of ‘Yolanda’-hit areas A child waits in the rain with fellow typhoon survivors as they line up in hopes of boarding a C-130 plane in Tacloban City. AP FILE PHOTO

MANILA, Philippines – Four months after Super Typhoon “Yolanda” (international name: Haiyan) ripped through the central Philippines on Nov. 8, 2013, a growing sense of recovery is notable in the reopening of health centers, clean water flowing again through community taps, children back to learning in temporary schools.

Yet the needs of children remain great and the signs of destruction brought on by Haiyan persist as an overwhelming reminder that much more needs to be done to restore devastated lives and communities, according to a report issued today by Unicef.

“The typhoon hit some of the country’s poorest areas, where before the disaster some 40 per cent of children were living in poverty,” said Abdul Alim, Unicef’s acting Representative in the Philippines. “Children were amongst the worst affected by the disaster, and they are at the center of our response.”

“We are now on the long road to full recovery.”

The report, Four Months After Typhoon Haiyan, documents Unicef and its partners’ work in providing 930,000 people with access to safe water and delivered hygiene supplies to more than 231,000 children across schools and child-friendly spaces. Some 83,200 children were vaccinated against measles, and 55,300 received vitamin A supplements while 97,000 children were also screened for malnutrition. 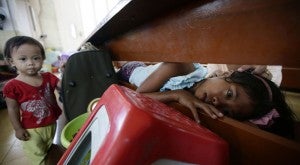 Typhoon survivors Maria Jane Bacsal and her sister Maria Nina Rose, left, rest inside the Redemptorist church, which is serving as an evacuation center, on Nov. 28, 2013, in Tacloban City. AP FILE PHOTO

Unicef has also supported the reestablishment of a protective environment for affected children, reaching 17,000 with psychosocial support to help address the psychological damage caused by the disaster and reduce elevated risks of abuse and violence.

But the report also makes clear that the road to recovery is likely to be long. It may be years before communities fully re-emerge from this disaster, and a host of immediate risks still looms largely on children, ranging from epidemic outbreaks, disruption and loss of access to learning, greater exposure to violence, exploitation and abuse and risks for both women and children of sliding into malnutrition.

Unicef and its partners are focused on ensuring that aid efforts improve the resilience of affected communities, in addition to providing urgently needed humanitarian assistance and restoring essential services. Relief efforts are targeted at children most in need, and emphasis is placed on help for the 40 worst-affected local government areas. UNICEF works hand in hand with government partners, civil society and communities on the ground, with mechanisms in place to give affected populations a say in the delivery of relief – so help reaches those most vulnerable.

“We are very grateful for the massive global support for those affected by the Typhoon, which has made real progress possible and helped save children’s lives,” Mr Alim said. “So much has been achieved in four months, thanks to the indomitable spirit and hard work of the people of the Philippines, and truly remarkable and generous global support.”

“We know from experience that it takes time and sustained effort to rebuild children’s strength and help them reclaim their lives. UNICEF will be here for the long haul, supporting affected children through the whole recovery process,” he added. A CHILD carries another child on his back as they try to live normal lives in Tacloban City, now barely recognizable as the regional hub that it was before Supertyphoon “Yolanda” and an equally tragic government response struck. INQUIRER FILE PHOTO

Since December 2013, more than 7,200 households in communities and evacuation centres were queried on humanitarian services in water sanitation and hygiene, education, health, child protection and nutrition. Further data collection is ongoing in the 40 priority municipalities for the Unicef response.

Health
Over 83,200 children under five were vaccinated against measles and more than 82,100 against polio. Efforts focused on most at-risk areas, including evacuation centres and communities with confirmed and suspected measles cases. UNICEF’s support also emphasizes disaster-resilient approaches, with one initiative focused on equipping 50 health centres with solar-powered fridges – a climate-smart move to avoid disruptions in case of power outages.

Some 17,000 children now benefit from 89 child friendly spaces in typhoon-affected regions, through UNICEF and partners. Children in these spaces have an opportunity to engage in activities – play, recreation or informal learning – that promote psychosocial recovery. Teachers were trained to support children in classroom environments, and over 350 social work professionals and caregivers were reached with training on psychosocial support for children and prevention of violence, exploitation, abuse and trafficking.

UNICEF speeds up aid to ‘Yolanda’ victims, including 4M children